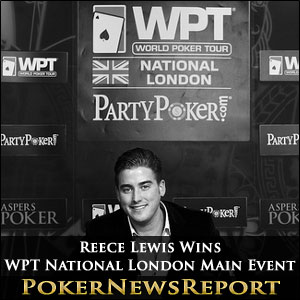 Reece Lewis won the WPT National London Main Event yesterday after pulling off one of the major upsets of this year´s London Poker Festival. Starting the day in third position behind long-time chip leader Elior Sion, all the momentum went in Reece´s favour after Elior Sion aggressive tactics back-fired.

Sion Chips up Lewis and Fisher – Doubles up Citrone Twice

Elior Sion started the final day of the WPT National London as if he wanted to finish the tournament by tea-time. Betting aggressively from the first hand, Sion lost more than 100,000 chips to Reece Lewis (Q♥ 10♥ > A♠ 7♣) when Lewis´ flopped two pair was promoted to a full house on the turn, and then enabled Carlo Citrone to double up when calling Citrone´s K♥ J♠ shove with nothing better than 9♠ 2♦.

Elior Sion´s aggressive betting again caught him out soon after – laying down A♥ 10♠ pre-flop after putting more than 80,000 chips into the pot against Robin Fisher´s (K♠ Q♦) 180,000 chips four-bet. Carlo Citrone was also able to take advantage of Sion´s generosity for a second time – doubling up once more with pocket Sevens against Sion´s 10♥ 2♣.

The WPT National London was reduced to a six-handed all-male affair when Emma Tolley ran her pocket Nines into the pocket Kings of Reece Lewis and become the first player to be eliminated from the final table. Soon after Carlo Citrone was sent to the rail in seventh after his shove with Q♣ 3♣ was called by Robin Fisher (5♠ 5♣) and the board ran 9♥ high and devoid of Clubs.

Thereafter, the tournament climax took a dramatic turn. Wang Weikang shoved his last 300,000 chips from the button with 3♥ 3♣ which was called with a three-bet shove from Rasmus Larsen (A♥ K♥) in the small blind and by Elior Sion (10♠ 10♣) in the big blind – creating a pot in excess of 3 million chips. The board ran 2♠ 4♠ 8♥ / 9♦ / 9♥ to eliminate both Weikang and Larsen, and give Sion a significant chip advantage over his remaining three rivals.

Despite Kevin Williams´ best efforts, the GUKPT winner could not get into a challenging position during the climax of the WPT National London Main Event. A shove with 8♣ 8♦ against Reece Lewis (A♠ 8♠) resulted in a split pot when both players made a straight, and his ultimate demise came when Williams (K♣ 10♣) shoved the last of his chips into Robin Fisher´s K♦ J♦ – who made a straight on the river.

Lewis Wins as Sion Runs into a Rocket

The heads-up was a short-lived climax to the WPT National London Main Event. Reece Lewis was able to use his chip advantage to reduce Elior Sion to under a million chips and, when Sion made an attempt to get more competitive, ran his A♣ 10♥ straight into Lewis´ A♥ A♠! The flop produced three low diamonds, and the J♦ on the turn presented the possibility of a chop. However, the K♥ on the river gave Reece Lewis victory and his first major live poker title.