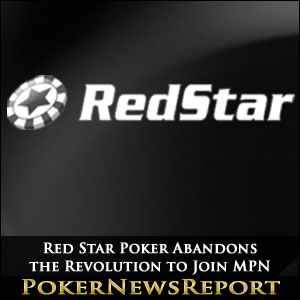 Red Star Poker was established in 2005 and was originally a stand-alone website, offering sports betting, poker and casino games to the East European market, before it affiliated to the Cake Poker Network and then the Revolution Network in May last year.

Now it has chosen to abandon the Revolution and join the European-friendly MPN in order to increase the liquidity available to its players and to provide scheduled tournaments which are hosted at a more convenient time for its predominantly European database of poker players.

The move has enabled Red Star Poker to offer a free $50.00 no-deposit poker bonus to new players simply for registering an account, although it has had to reduce its first deposit poker bonus to “200% up to $1,000” in order to keep in line with the offers from other sites in the MPN Network.

Existing players will find the site´s exclusive $15,000 rake race more to their liking than the previous network-wide options available on the Revolution Network and a new Loyalty Points promotion will allow players to qualify for rakeback of up to 30%.

Because the VIP Points and Status Privileges earned while on the Revolution Network will be incompatible with the Loyalty Points promotion available on MPN, all existing Red Star Poker players have had their VIP Points reduced to zero and will have to start earning their statuses again when they next log into their account.

However, every existing player is being elevated to the top level of the new Loyalty Points promotion for the months of August and September and will start earning 30% rakeback immediately. One important point to note is that the Loyalty Points earned under the new scheme are distributed according to the “weighted contribution” method, rather than the “dealt rake” system that was used previously.

New Games also on the Table

The range of cash games that Red Star Poker players will be able to enjoy has been extended to include 5 Card Poker, Razz and 5 Card Draw, and there is also a better mix of disciplines among the Sit and Go games and multitable tournaments that are available.

Fans of fast-fold poker will also be able to play “Blaze Poker” – a game in which players who win 20 raked hands can win an additional bonus up to $100.00 for shooting down a house of cards – while tournament players will appreciate the better start time for the network´s $65,000 guaranteed “Sunday Showdown”.

The move to the MPN makes sense whichever way you look at it. Despite accepting deposits and paying withdrawals in Bitcoins, Red Star Poker never accepted players from the US because of the terms of its licence, and its move to MPN trebles the pool of poker players according to traffic figures.