Former Full Tilt Red Pro players have been informed via an email by FTP’s new Team Pro manager that they won’t be part of the newly launched site. 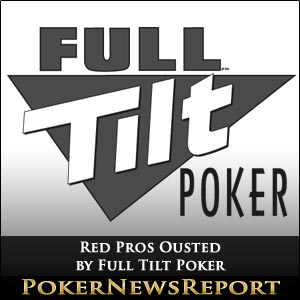 Former Full Tilt Red Pro players have been informed via an email by FTP’s new Team Pro manager that they won’t be part of the newly launched site.

Prior to Black Friday in April, 2011, Full Tilt Poker sponsored a group of regular pros on its site who came to be known as the Red Pros. This group consisted of players such as Jennifer Harman, Andy Bloch and Howard Lederer, among several others.

After the Department of Justice swooped on US facing poker sites, accounts were frozen at Full Tilt Poker, and it was only recently that FTP was sold to its rival, Poker Stars under a three –way deal with the Department of Justice. Throughout the 18 month ordeal, former Red Pros demanded to know what their status would be under the new parent group, Rational Group, and how Full Tilt Poker intended to honor prior commitments to them by the site.

This week, they were put out of their misery when an email was sent to them via the new Manager of Team Pro, Dustin Iannotti, explaining that they would no longer be retained as sponsored Full Tilt Poker players after the relaunch, which took place at the beginning of the month.

The “Red Pro” team is not being continued by the Rational Group and a new team has been launched under the name of “The Professionals”, explained the email. Unfortunately, we do not have any immediate plans to expand the Full Tilt Pro team at this time.

The email explained that, besides the money which it committed to pay back to non-US Full Tilt Poker players, the new owners, the Rational Group did not assume any liabilities of the previous Full Tilt Poker companies, and therefore previous contractual agreements that Full Tilt Poker may have had including with FTP Red Pros were excluded.

In the meantime, players from the United States are still waiting to hear how and when they will be paid out the millions still due to them by Full Tilt Poker, with poker player rights groups such as the PPA estimating that the payout process will be a long one.