Online poker in the USA might still be something of a no-go area to many, but not even the dark days of Black Friday can halt the march of live poker. 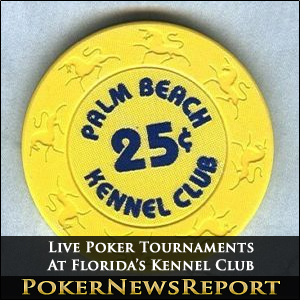 Online poker in the USA might still be something of a no-go area to many players, but not even the dark days of Black Friday can halt the march of live tournament poker – as highlighted in Florida recently.

April 15 last year is certainly ingrained in all our memories, with the US Department of Justice (DoJ) shutting down numerous poker rooms – including Full Tilt Poker, PokerStars and Absolute Poker – but the fallout that was expected to hit live tournaments hasn’t materialised.

European tournaments also saw record numbers throughout 2011, but the latest to create a new mark comes in Florida’s Kennel Club as 2,607 players signed up for last weekend’s $555 buy-in event that guaranteed a $1 million prize pool.

That’s an impressive 1,007 more than the previous record for a Florida event held by Hollywood’s Seminole Hard Rock Hotel & Casino, although the event wasn’t without controversy.

Now, as you might expect with such a name, the Palm Beach Kennel Club is a dog track, but that didn’t stop them from hosting a huge poker tournament as part of the World Series of Poker Circuit Series (WSOPC) stop – although police had to be called in at one point as players lined the streets outside the venue for a shot at riches and glory.

Hopefuls began gathering to register at 4am on the Saturday to take part in a tournament that didn’t start for seven more hours, resulting in some unsavoury incidents, including arguments of line placings as well as scuffles over scalps trying to sell entries for a massively-inflated $2,000.

That’s when organisers called the police – as reported by the South Florida Sun-Sentinel newspaper – as the trouble began to spiral out of control, with WSOPC publicist Nolan Dalla saying that she reckons that flare-ups were “the closest thing to a riot in poker as has ever happened”.

Dalla added that the morning’s proceedings reminded her of the last opening session at the 2009 staging of the WSOP main event, when as many as 500 players tried to register after the tournament had reached its maximum in the Rio All-Suite Hotel & Casino.

Additionally, Kennel Club director of publicity Theresa Hume was left astounded by the interest shown at the weekend, adding that the 2,607-player field was “way beyond what we were expecting…and we were expecting a lot”.

However, the enormous prize pool of $1 million must certainly have been a major factor is attracting so many entries, with the high in-the-money finishers in line to secure almost unbelievable returns on investment from their $555 entry fee.

One player, 25-year-old Evan Snow, from Coral Springs, was shocked by the evident “pandemonium” as so many players turned up without first registering online.

Snow reckoned players ought to have made better plans before turning up on the day, saying that he believes players in Florida have become “pretty spoiled” by being able to “just show up and play”.

However, he did admit to being impressed by the numbers, concluding by saying that, “for 2,600 people to come to a dog track, that shows how much they wanted to play”.

Florida-based Vietnamese player Anh Lu emerged as the victor for $182,750 after beating Oklahoma’s Charles Flett in their heads-up encounter on Sunday.

Lu – who previously worked as a nail technician in Bradenton – helped create a prize pool that eventually hit the $1,250,345, with runner-up Flett picking up an impressive $113,759 for his troubles.

A side issue – but no less important – is the economic boost given to the local community through major poker events.

West Palm Beach undoubtedly benefited from hotels being packed with poker players from out of town, with the majority booking for five days’ stay – which is significantly longer than regular holidaymakers take.

Local hoteliers and dignitaries were delighted to welcome the poker hopefuls, of course, with Holiday Inn Palm Beach Airport representative Jesse Bush pointing out that “they’re coming from all over the country” to boost the economy during tough times.

Bush added that approximately half of his hotel’s 199 rooms were taken by poker players last weekend, while last year’s figures show that more than 1,100 nights of business was recorded during the previous staging of the event.

More Money to be Made in Florida

The Palm Beaches Chamber of Commerce president Dennis Grady reiterated Bush’s facts, stressing that the tournament was good for all types of business in the community when taking into account “the hotel bed tax, poker pari-mutuel taxes and sales tax revenue that comes into the county and state” to assist their economies.

The WSOPC tournaments at the Kennel Club are still running, with the final event beginning next Monday when players will line up to take part in the $345 buy-in No-Limit Hold’em Turbo event.

The $1,600 buy-in re-entry main event kicks off on Saturday, with Day 1b taking place the following day – meaning the local community is in line to gain even more over the next few days as poker players continue to spend and entertain during the WSPOC stop.

The next leg pulls into Caesars Atlantic City on March 1 for 12 days of poker, fun and partying.