While the recent ruling by the DoJ that found only sports betting is applicable to the 1961 Wire Act’s ramifications and not online poker, legal experts cautioned poker players to curb their enthusiasm. 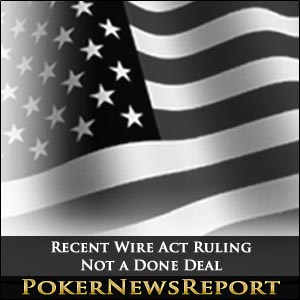 While the online poker industry has been ecstatic with the recent ruling by the U.S. Department of Justice (DoJ) that found only sports betting is applicable to the 1961 Wire Act’s ramifications and not online poker, legal experts have cautioned poker players to curb their enthusiasm, as a DoJ ruling is not etched in stone, it was reported by Reuters.

“This is just an opinion of the Department of Justice and only reflects what the Obama administration would bring charges on,” said Greg Gemignani, an expert in online gaming and an attorney with the Las Vegas-based firm of Lionel Sawyer & Collins. “Future departments of Justice could interpret the Wire Act differently.”

A DoJ opinion can possibly be withdrawn and reversed. Various courts can also intercede, which would void the DoJ’s memorandum. A sure-fire way for the DoJ ruling to stand would be codification by Congress into law.

“An opinion of the Office of Legal Counsel can be withdrawn or changed, although it is not often done,” said Linda Shorey, a K&L Gates LLP partner in Pennsylvania who specializes in gambling laws. “Under the U.S. Constitution, only the courts have the authority to determine whether the Wire Act applies to poker wagers,” she added. “The Department of Justice memo is not binding on the courts.”

Previously, a U.S. Court of Appeals in New Orleans also ruled that the Wire Act applied only to sports wagering, but a Utah federal judge ruled against it. With the Wire Act still clouded by uncertainty in courts of law, Congress may feel a certain pressure to tackle the issue. However, with upcoming elections slated for November, lawmakers are hesitant to address controversial matters that might anger members of their constituency.

In the meantime, other industry insiders, such as Poker Players Alliance (PPA), are of the opinion that the DoJ Wire Act stance gives an all-clear for online poker legislation to continue progressing.

“This ruling gives states the confidence to move forward with intrastate internet poker,” said PPA’s Executive Director John Pappas. But the PPA, as the main lobbying group for poker players, still supports legislation at the federal level, as opposed to individual states passing their own online poker bills. Pappas added that he is certain that “efforts at the federal level are going to increase as well. There are a number of lawmakers that feel like it is time for Congress to step in.”