Montreal player Rayan Chamas has nearly twice as many chips as his nearest opponent as the CAD$2 million guaranteed Canada Cup heads into its penultimate day. 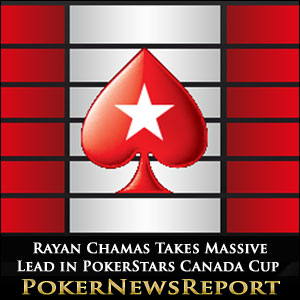 Montreal player Rayan Chamas has nearly twice as many chips as his nearest opponent as the CAD$2 million guaranteed Canada Cup heads into its penultimate day.

Day 3 of the PokerStars Canada Cup was an exceptionally short day, as the field of seventy-two players who took their seats at the Playground Poker Club in Montreal was reduced to the final three tables who will contest today´s penultimate day in a little less than five hours.

The pace of eliminations was so quick that the majority of hands were not recorded; however, the player who took the maximum advantage of the rush to the cashier´s desk was Rayan Chamas, who chipped up consistently throughout the day to bag and tag 2,682,000 chips – more than a million chips ahead of his closest opponent.

Does Somebody Have a Plane to Catch?

With the seventy-two players who started Day 3 of the PokerStars Canada Cup each assured of a CAD$6,010 min-cash, the motto of the day was double up early or pack your bags for Vegas; and, as a result, the tournament was losing players at the rate of nine per hour.

By the time of the first break, Rayan Chamas had doubled his overnight chip stack and was up to 1.4 million chips – closely pursued by Day 2 chip leader Jeremie Bilodeau. Bilodeau fell back during the later levels as new challengers emerged, but none could keep pace with Chamas – who at one point had half the chips in play on his table.

Players Rise and Fall in Pursuit of Chamas

One player who made a valiant attempt to keep tabs on Chamas was Jonathan Driscoll. Driscoll had been up and down the Canada Cup leaderboard on Day 2 like a yo-yo, but was making solid ground on the chip leader on Day 3, before getting all in with Ace-Queen against an opponent with Ace-Deuce and getting sucked out on the Turn.

In contrast, Sylvain Siebert had played a solid game throughout the opening couple of days, and himself was making ground on Chamas before losing a handful of significant pots during Level 20 (blinds 5,000/10,000 – ante 1,000). In his final hand he moved all-in with J♦ 10♥ and got a call from Vincent Jacques (9♠ 9♥). Jacques´ Nines held, and Siebert was eliminated in twenty-ninth place.

Close to the end of play Francois Goulet emerged as Rayan Chamas nearest challenger – although a little fortunately. Goulet had min-raised from late position with A♣ J♣ and had an agonising decision to make when Canadian pro Mike Watson (A♠ K♠) shoved his last 185,000 chips. Goulet eventually called and was mighty relieve to see the flop of 8♣ 7♣ 4♠ followed by the Turn of 10♣ to give him the nut flush and send Watson to the rail.

Without being disrespectful to those at the top of the Canada Cup chip counts, there are a handful of top players loitering at the lower end of the leaderboard but still in with a chance of winning the $366,660 first prize.

Marc Andre Ladouceur and Jonathan Duhamel were seated for much of the day alongside each other at the feature table, but both players survived with 216,000 chips and 164,000 chips respectfully. WPT Alpha8 winner Steven Silverman progressed through to the penultimate day with 139,000 chips, while Magic Antonio Esfandiari had a more positive day and lies in sixth place overnight with 970,000 chips.

Looking Ahead to Day 4 of the PokerStars Canada Cup

When play resumes today at the Playground Poker Club in Montreal, the twenty-seven players will have just a few more hands to play in Level 20 before the blinds increase to 6,000/12,000 (ante 2,000). Play is scheduled to continue until Wednesday´s nine-handed final table is set, and it should be a fascinating day´s action with the top four on the leaderboard all drawn on the same table!