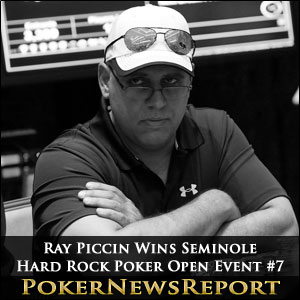 Ray Piccin, who up until Monday only cashed in three other tournaments, has proven that anyone, of any ability can take down a poker tournament. But even Piccin couldn’t fully comprehend the magnitude of his accomplishment. After plunking down a meager $560 several days earlier, Piccin would walk away with over $291k. Compare this to his most recent cash, which was worth less than 1/100th as much.

Day 3 of Event #7 began with 19 players still in contention for the title. Among them was WSOP bracelet winner Bryan Campanello, who started the day as the chip leader. Players would be eliminated in quick order, and only a short while after play began, the field would be reduced to the final nine.

For a small buy-in event, the final table proved to be a difficult one. In addition to Campanello, it featured 2011 WSOP National Championship Sam Barnhart. Luckily for the rest of the table, Barnhart would be eliminated in ninth place. His effort was good for $23,725.

Wendy Freedman, Johnny Miller and Ben Zamani would all be eliminated within the next seven hands. Jon Cohen would then cripple former chip leader Campanello, as he called a river bet with two pair against Campanello’s likely bluff. Campanello, who was down to just 11 big blinds, would be eliminated shortly later.

Then it became Darren Rabinowitz’s time to shine. A professional player with a slew of four and five digit tournament cashes to his name, Rabinowitz would double up twice before busting Cohen in fourth place when his Ace-seven held over Cohen’s King-five.

Neville Darrell was eliminated in third, and Rabinowitz would begin heads-up play with a 3:1 chip advantage over Piccin. Given the youngster’s experience and chip advantage, it seemed that barring a terrible run of cards, Rabinowitz would win the tournament. But this is poker folks. Piccin would force Rabinowitz to fold in several large pots, and would take control of the match without ever having to win a flip – a remarkable feat.

Once Piccin gained the chip lead, he would never look back. Thirty hands later the tournament was over, and Piccin had accomplished something that even some of the most prestigious pros can’t claim – he won over 500 times his buy-in in a single tournament.

The action at Seminole is just getting started, as the $10 million guaranteed (Event #21) is set to start this Thursday.