Full Tilt CEO Ray Bitar issued a fond farewell to the company he founded while his co-defendant, Nelson Burtnick, surrendered, pled not guilty and posted bail. 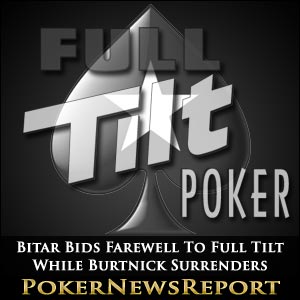 Full Tilt CEO Ray Bitar issued a fond farewell to the company he founded while his co-defendant, Nelson Burtnick, surrendered, pled not guilty and posted bail.

In 2004, Ray Bitar began Full Tilt Poker and built the company into the 2nd ranked online poker site worldwide with the help of a handful of poker’s biggest stars. The heyday lasted a good number of years until it all came crashing down on Black Friday amid allegations by the U.S. Department of Justice (DoJ) that Bitar was running a “global Ponzi scheme.”

With the official change of ownership to PokerStars made possible through lengthy negotiations with the DoJ, Bitar released a statement in which he said goodbye to Full Tilt. For the past 15 months, I have worked hard on possible solutions to get players repaid, Bitar said. It has been a very long road, with lots of bumps along the way, but I am glad we have gotten to the end. I only wish that we could have resolved the situation much sooner.

Forced to submit to electronic home-monitoring as a condition of his bond as well as being confined to travel between his California home and the courthouse for the Southern District of New York, Bitar continued by saying,  [The] settlement also ends the U.S. government’s legal case against the Full Tilt companies. I am glad that this chapter has closed. I would like to thank the company’s many dedicated employees who helped achieve this result. It has been a pleasure working at Full Tilt and I am grateful for the many friendships and memories that I made there. I wish everyone in the Full Tilt family success in their future endeavors.

The ex-CEO can now concentrate on defending himself against the criminal charges that the DoJ hit him with upon his return to the U.S. from Full Tilt’s Dublin headquarters on July 2. Co-defendant Nelson Burtnick, in charge of payment processing for Full Tilt, will also be facing the music of the government allegations, as he arrived in New Jersey from Dublin and surrendered to authorities. Burtnick was released on $500,000 bond.

Thus a new chapter in the Full Tilt saga begins, one in which Bitar, Howard Lederer and Chris Ferguson will have no part. PokerStars has acquired the assets of the company through its deal with the DoJ and will be relaunching in roughly 90 days. Non-U.S. players will have their accounts reactivated and can either withdraw their funds that were inaccessible for well over a year or use the money to play at the site’s reopening. U.S. players will have to submit paperwork to the DoJ’s Asset Forfeiture and Money Laundering Section in order to be reimbursed.