The House Judiciary subcommittee´s hearing on the proposed “Restoration of America´s Wire Act” has been postponed due to anticipated bad weather in Washington. 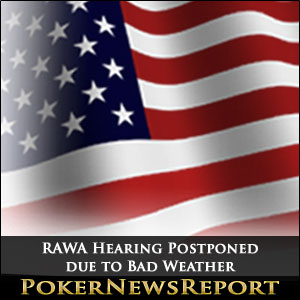 The House Judiciary subcommittee´s hearing on the proposed “Restoration of America´s Wire Act” has been postponed due to anticipated bad weather in Washington.

Supporters of online poker, fearing that Sheldon Adelson´s “Restoration of America´s Wire Act” (RAWA) might gain some traction this week, can breathe a sigh of relief after Mother Nature intervened to force the postponement of tomorrow´s hearing.

With the threat of heavy snow and temperatures plummeting to -11ºC/12ºF, the decision was taken to protect the delicate creatures on Congress and give everybody a long weekend – somewhat ironically after Senators had just finished a heated debate on global warming.

No New Date Yet for Hearing

Due to the sudden decision to postpone tomorrow´s hearing of the House Judiciary subcommittee on Crime, Terrorism, Homeland Security and Investigations, no new date has yet been set for the subcommittee to reconvene and discuss the “merits” of HR 707.

There is little doubt that the Bill´s author – Jason Chaffetz, who sits on the Republican-majority subcommittee – will be keen to get the hearing rescheduled as soon as possible to thank Sheldon Adelson for the significant financial contributions he made to the Republican Party this year – contributions that enabled the Republicans to gain a majority in both Houses of Congress.

Back in January, Sheldon Adelson held a behind-closed-doors meeting with senior Republican members of the House Judiciary Committee – the next step the Bill would have to pass before being debated in Congress – so it is fair to assume that HR 707 was expected to have flown through the subcommittee stage, and that the delay due to the postponement of the RAWA hearing is an inconvenience for the Bill´s supporters.

Opposition to RAWA Starts to Build

However, the passage of RAWA through the subcommittee stage is no forgone conclusion. Many Republicans have reservations about supporting HR 707 due to allegations of “cronyism”, while others have agendas to devolve authority and control out of Washington and back to the states.

The Poker Players Alliance (PPA) has mounted a strong Twitter campaign based on this second objection – asking players to tweet their Representatives in Congress with a message to #OpposeHR707 and defend the states´ rights under the tenth amendment to authorise online poker sites.

The PPA´s Executive Director – John Pappas – was also networking among conservative activists opposed to RAWA at the Conservative Political Action Conference in Washington last week and managed to fill a petition against the passage of the “Restoration of America´s Wire Act” with more than 500 signatures.

The Fight against RAWA Goes On

The rescheduling of the subcommittee´s hearing on the “Restoration of America´s Wire Act” could take some time to organise. In addition to the subcommittee members having to rearrange their diaries, there are also the travel plans of the witnesses who would have given testimony at the hearing to consider.

The likelihood is that the hearing will now take place after Easter, although the PPA and other interested pro-online gambling organisations have warned against complacency. The PPA is currently refining the “Take Action Page” on its website, and those who wish to support the fight against RAWA are invited to subscribe to the PPA´s mailing list to receive email alerts of any new threats to online poker in the US.

THX 2 to all who participated! The iPoker prohibition hearing has been postponed, please be vigilant for updates as it will come up again