Randy Ohel has picked up a gold bracelet for winning the $2,500 buy-in 2-7 Triple Draw Lowball (Limit) event #22 at the World Series of Poker. 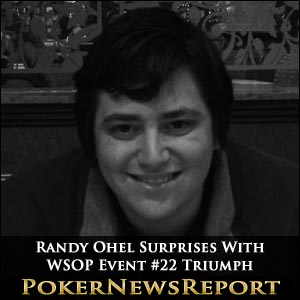 Randy Ohel has picked up a gold bracelet for winning the $2,500 buy-in 2-7 Triple Draw Lowball (Limit) event #22 at the World Series of Poker (WSOP) in Las Vegas.

What followed was an incredible head-to-head in the Amazon Room of the Rio All-Suite Hotel & Casino that took six-and-a-half hours to complete. The chip lead swapped back and forth regularly, while both players had the vast majority of their chips in play several times – only to somehow battle back.

Of course, something had to give eventually, with Lazer – who was down to under one big blind – shoving the remainder of his stack into the middle, to be quickly called by Ohel.

The first draw saw Lazer and Ohel take two cards, while, on the second draw, Lazer stood pat and Ohel drew one. The third draw saw Ohel stand pat as Lazer drew one card. Ohel then showed 9-6-4-3-2, while Lazer revealed 8-6-5-3-5 for a pair of fives to hand the title to Ohel.

Lazer collected $89,714 for his runner-up finish, while Ohel – who enjoyed the support of many fans at the rail – really just looked relieved as he calmly celebrated his triumph.