Randy ‘nanonoko’ Lew has blasted on to the live poker scene with a composed triumph at the PokerStars Asia Pacific Poker Tour (APPT) Macau main event. 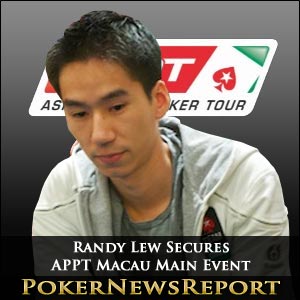 Having attracted a 575-strong field, PokerStars Team Online player Randy Lew overcame the handicap of entering the final table as the short stack to see off home favourite Jimmy Pan in a heads-up battle that rewarded the Vancouver-based pro with a cheque for $483,902.

Lew is undoubtedly one of the world’s finest multi-tabling players – and regularly has 24 tables going at the same time – but left the States for Canada following Black Friday back in April to maintain his online presence and success.

Now he has ventured further from home to enjoy his first live victory and, while Lew’s breathtaking win does come as something as a surprise with such a star-studded field in attendance, his online record has been incredible – and kudos certainly have to go to PokerStars Team Online with the American’s triumph.

Lew showed great patience, as well as determination, to find a path past the record-setting APPT 575-player field and on to glory when defeating Pan to leave the Macau hero with $303,658 for second place.

It was also Lew’s biggest live cash, overtaking his 10th place finish in January’s Aussie Millions main event, which had netted him AUD$100,000.

The final two provided the railbirds with more of the same exciting play the tournament had featured throughout as Pan put up a momentous display of resistance all through the fourth and final day of the main event.

Saturday’s Day 3 saw 96 players begin the charge for glory, but ended with just 15 survivors for two tables on the final day of the $6million guaranteed prize pool event of season five.

Lew began his head-to-head clash with Pan just 750,000 chips ahead of his opponent on nine million.

Pan had just closed the gap on Lew after eliminating Australian Jeff Rossiter – and was more than ready to mix it with the North American.

After some more thrilling play, through, Pan was eliminated. However, he went out in style, moving up the gears as the day wore on.

The final hand saw Pan, who had become more aggressive after his previous big pot win against Lew, open on the button to make it 400,000.

Lew called from the big blind and the flop showed Q♥ 10♠ 8♠ for the American to lead with 400,000. But Pan showed no signs of reverting into his shell and moved all-in – to be immediately called by Lew.

Pan would have been thrilled to set down his K♦ Q♠ and be confronted by Lew’s Q♦ 10♣, had it not been for the flop that had turned Lew from a massive underdog to favourite with his queens and tens.

Pan had to see a king on the table to save his tournament life. However, the turn showed the 5♦ and the river was the J♣ and Lew was crowned champion at the APPT Macau.

The turn was the 2♦ and, as the river failed to pair the board, Mohan was hitting the rail in 10th.

All other players folded to allow Steicke to show 7♦ 4♥, with Nordstrom holding A♠ A♦.

The flop was interesting as it showed 5♣ 3♣ 2♦ to give Steicke an open-ended straight draw. The only problem was Nordstrom had two of the aces Steicke needed to make a straight.

The 9♣ arrived on the turn and river came down as the 10♦, meaning Nordstrom’s aces held to send Steicke out in ninth.

Australian Rossiter accounted for the next elimination, too, when seeing off Nordstrom in seventh place.

However, Rossiter quickly moved all-in and Nordstrom, following some more deliberation, called to show A♣ K♥ against his opponent’s 8♥ 8♠.

Sixth place went to Fam after he lost out to Randy Lew. The action folded to Fam, on the button, and he moved all-in for about 1.3 million. Lew took a quick peeked at his hole cards before calling to table 10♠ 10♣, while Fam showed A♥ 4♠.

It was all over for Fam a few moments later when the 9♥ came on the turn and the 6♣ arrived on the river. The Singaporean left with $83,772 in sixth.

China’s Zuo Wang finished in fifth place when losing out to Rossiter. Wang went all-in pre-flop for his final 530,000 chips and Lew and Rossiter called from the blinds as they attempted to eliminate the short stack.

Both blinds tapped the table on the 7♠ A♣ 9♣ flop and 10d turn. However, once the river showed 8♦, play became much more interesting.

Lew checked, only for Rossiter to swiftly bet 700,000. Lew laboured his decision before finally making a raise of an extra one million.

Fourth place, as well as $130,725, went to Germany’s Fabian Spielmann. Rossiter raised from the small blind, but big blind Spielmann re-raised all-in and was called by his opponent.

Rossiter showed A♣ Q♣, while Spielmann revealed K♠ 10♠. The K♣ J♣ 8♥ flop gave Spielmann the lead with two kings, although Rossiter had secured a massive draw.

The 2♣ turn came next to hand Rossiter a club flush, leaving PokerStars qualifier Spielmann beaten. The 8♦ river completed the board, but the German was gone.

But Rossiter could not make it to a heads-up finish when succumbing to home favourite Pan after losing a large pot to Lew a few hands before.

Now the short stack, Rossiter shoved all-in from the button when holding 10♥ 9♠ and was called by small blind Pan, who showed A♥ Q♣.

Rossiter was a massive underdog and, when the flop ran K♥ 5♠ A♠, the Aussie was already standing, poised to leave, before the turn and river of 6♣ and 9♦ offered him no help.

The heads-up battle between Lew and Pan was on now – and the former would emerge victorious and with a healthier bank account.

Other notable finishers inside the top 30 included PokerStars qualifiers Josh Barrett, of Australia, who picked up HK$124,400 for finishing 14th, Pole Michal Karolak with his HK$108,900 for 18th, and yet another Aussie Grant Levy in 25th for HK$77,800.