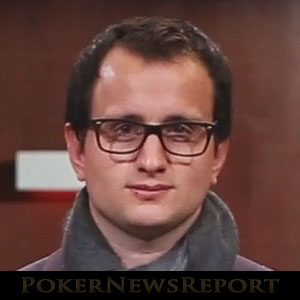 Kempe managed to outplay a final table that included Poker Hall of Famers Erik Seidel and Phil Hellmuth on his way to victory. He claimed the title when his pocket eights held up against the pocket deuces of runner-up and fellow countryman Fedor Holz.

The 49 players who entered each bought in for $300,000. With such a steep entry fee, the tournament attracted both the world’s top poker players and wealthy businessmen to the Aria Resort & Casino in Las Vegas. No rake was taken from the buy-ins and the sponsors added another $300K, creating a prize pool of $15 million.

Poker fans were in their glory over the past four days, as the SHRB was televised on the CBS Sports Network on a short delay. It was an opportunity to watch the game’s best players duke it out on the felt, and it made for exciting television.

Hellmuth’s incessant chatter showed viewers at home exactly why he has earned the nickname of the “Poker Brat.” The all-time leader in WSOP gold bracelets can use his SHRB prize money at the 47th annual WSOP in hopes of capturing a 15th WSOP title. The world’s most prestigious poker series is now underway at the Rio All Suite Hotel & Casino.

Who Won the Challenge?

An added perk for poker fans of the 2016 SHRB was a $1 million prize offered by Poker Central to any contestant in the U.S. who could correctly pick the final table, including order of finish. The odds of winning the MVMT Million Dollar Final Table Challenge were astronomical, but it was fun to play along.

The contestant who came closest to picking the final table will win a $10,000 prize based on points awarded for each correct selection of the seven final table spots. Poker Central has yet to announce the winner.

With his SHRB victory, Kempe’s career earnings on the tournament circuit are just short of $7 million. The Aria suits him well, as three months ago he finished runner-up in the $25,000 Aria High Roller for $321,790.

His best cash prior to the SHRB was last December when Kempe claimed the title in Prague in a €25,500 8-Handed High Roller and won $591,722. Kempe is now 18th on Germany’s all-time money list and 81st on the worldwide list.