High stakes player Viktor ‘Isildur1’ Blom goes from rags to riches and back again and Latvian MTT grinder ‘paybackLV’ is on a streak in October. 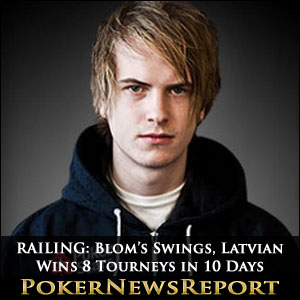 High stakes player Viktor ‘Isildur1’ Blom goes from rags to riches and back again and Latvian MTT grinder ‘paybackLV’ is on a streak in October.

For Swede Viktor Blom, every day at the highest stakes in the online poker world is a never-ending Spin and Go game. He doesn’t care about table selection, willingly accepting every challenge and almost always, he gets the action he wants at the tables, no matter the format. Because of his strategy and his very aggressive play, the Swede who plays on Full Tilt under the nickname ‘Isildur1’ witnesses major swings in his bankroll, swings that would crush any money-aware player. Not ‘Isildur1’ though. The run he had this week can confirm that.

The Swede started off with a huge win on Monday; he played nosebleeds 2-7 Triple Draw and Fixed Limit Omaha Hi-Lo and cashed in almost $600,000 at the end of the day. The run continued on Wednesday winning $400,000 in two and a half hours in a limit heads-up battle against ‘Carlooo13’. After that however, the tables turned in favor of the unknown.

Despite the swing, Blom continued to grind and play overly aggressive switching to the $2,000/$4,000 2-7 Triple Draw games. There, he met Sebastian ‘taktloss47’ Ruthenberg playing for one and a half hours and losing yet another $198,000. Steaming, ‘Isildur1’ switched back to Omaha Hi-Lo where and tried to get his revenge against ‘Carlooo13’…to no avail. The unknown kept going and profited from the tilted play of the Swede; he increased his lead over Blom with another $168,000 after just 201 hands. And what seemed to be yet another six-figure winning day for ‘Isildur1’ turned into a major downswing that cost him almost $500,000.

But not all is lost for the aggressive player; according to HighStakes DB, the Swede is still up $56,637 in October, on FT. If we also add his PokerStars winnings, he is over $127,000 richer than the start of the month. For the year, things are much more serious: he is $1.4 million in the red, third in the biggest online cash losers’ leaderboard.

The second place is occupied by Phil ‘Polarizing’ Ivey who can’t win any more on the virtual felt. Along with his $12 million lost in the trial against Crockfords Casino, Ivey lost over $140,000 online, in the first nine days of the month. Overall, he is down $2,416,665 for the year.

In the MTT category, a Latvian has been enjoying the other side of the coin since the month started. According to PocketFives leaderboard, Riga-based ‘paybackLV’ is on a major heater and currently leads the monthly race. He won eight online tournaments in the first ten days of October – one on Full Tilt, Winamax and PokerStars, two on PokerStars.fr and three on PartyPoker. He also had six second-place finishes and four bronze medals. Money-wise, the Latvian won $67,143 this month; his biggest score was sealed on October 5, 2014 in the Sunday Supersonic on PS ($9,420).

The first Sunday Million of the month was captured by UK-based player ‘luetch1’; he entered the final table with only 12 blinds but rode the variance wave pretty well to eventually cash in almost $200,000. This was not his first major win of his online career; in 2013, he won the Sunday Warm-Up for $97,000.

The yearly PocketFives leaderboard is dominated by two of the top online tournament grinders. Five-million-dollar all-time winner Rick ‘TheClaimeer’ Trigg is currently number one with several majors won this year including the Wednesday Hundred Grand and The Big $109. Chilean Nicolas ‘PokerKaiser’ Fierro is second in both the yearly and the all-time leaderboard. He had a great WCOOP last month, taking down Event #28 for over $100,000 and finishing second in Event #53 for almost $