The Rational Group, parent company of PokerStars and Full Tilt, announced that Rafi Ashkenazi has been appointed as Chief Operating Officer. 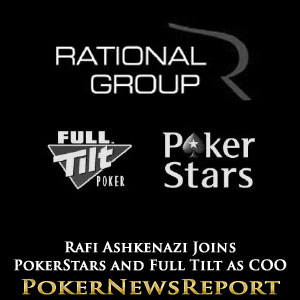 The Rational Group, parent company of PokerStars and Full Tilt, announced that Rafi Ashkenazi has been appointed as Chief Operating Officer.

The announcement was made in a press release by Rational Group CEO and Chairman Mark Scheinberg, who said that Ashkenazi will begin his duties with the world’s top two online poker sites on Feb. 1. Those duties include handling details in the areas of customer support, marketing, information technology management, poker room management, game integrity, security and payment processing. Ashkenazi will perform those functions in the company’s Isle of Man headquarters and will report directly to Scheinberg.

Rafi is a fine executive with outstanding management and people skills and has been very successful directing the operational complexities of a global gaming company, Scheinberg said. I am very happy that he will bring that expertise to our senior management team.

Ashkenazi’s resume includes COO and board member duties for seven years at Playtech, a worldwide gaming software company. Playtech grew tremendously under his direction, with employees totalling more than 2,400 after initially numbered at roughly 200.

With PokerStars, the Rational Group has built a stellar reputation by continually raising the bar with high-quality, trusted products while delivering best-in-class customer support and service, said Ashkenazi. I am excited to join the team and add my skills to that tradition of industry leadership.

PokerStars has been the top-ranked online poker site in terms of customer traffic for roughly six years. The site was also named tops in a customer service survey conducted by Etruvian Consulting in November. Full Tilt was the second-ranked site prior to its shutdown in June of 2011, but regained that position upon relaunching on Nov. 6, 2012. Party Poker briefly overtook the second spot following the migration of Bwin Poker from the Ongame Network to the Party Poker platform a few weeks ago. But Full Tilt has once again moved into the no. 2 slot, according to PokerScout.