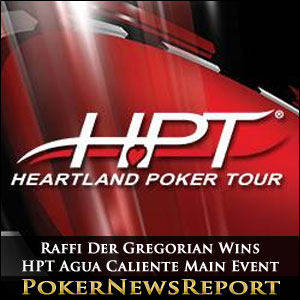 The venue was the Agua Caliente Casino Resort Spa in Rancho Mirage, California for the first of four stops in the Golden State that are part of the Gold Rush Series. The other three all take place in September following a quick jaunt to Black Hawk, Colorado for 11 days of live poker action that began on Sept. 5 and will conclude with the Main Event final table on Sept. 15 at the Colorado-Golden Gates Casino Resort.

Der Gregorian’s first experience at a HPT tournament was indeed a good one, as the Glendale, California native notched his first-ever tournament cash. He was seventh in chips among nine players when final table action began, but didn’t let that stop him from taking home almost $75K.

Der Gregorian had to outplay a tough field on the tournament’s last day that included pros such as Allen Cunningham and Michael Rocco. Cunningham was the chip leader to start the day, but a hand lost to the aces of Der Gregorian meant a fourth place finish and $21,973 in prize money. Cunningham adds that prize to his more than $11.5 million in career earnings.

Rocco, whose last cash was a runner-up finish in the California State Poker Championship in L.A. in May, was also second-best against Der Gregorian. A straight draw and two over cards saw Rocco go all-in on the tourney’s last hand, but his outs failed to appear. His efforts were good for $45,803, putting Rocco’s lifetime winnings at $640,597.

HPT action is already underway at the Commerce Casino in Los Angeles that began on Sept. 4. Satellites have begun for the $1,650 Main Event that is on the docket for Sept. 18 with Flight 1A. Re-entries are permitted in Flight 1B or 1C, leading up to the final table on Monday, Sept. 22.

The other destinations of the Gold Rush Series are the Thunder Valley Casino & Resort in Lincoln from Sept. 15-28, and the Club One Casino in Fresno that kicks off on Sept. 24. The $1,650 Main Event for the former begins Thursday, Sept. 25, while Main Event participants in Fresno will pay the same buy-in on Oct. 3 in hopes of landing under the spotlights of the televised final table on Oct. 6.