Raffaele Penna staged a remarkable recovery from being the shortest-stacked player when the final table was six-handed to win the Venlo Poker Series Main Event. 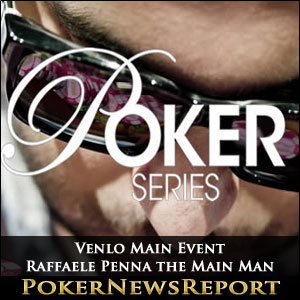 Raffaele Penna staged a remarkable recovery from being the shortest-stacked player when the final table was six-handed to win the Venlo Poker Series Main Event.

There was yet another good entry for a Venlo Poker Series tournament, as 112 players paid the €700.00 buy-in to register for the Main Event and create a prize pool of €74,544. The event attracted a couple of big names in the form of Marcel Vonk and Pieter de Korver (who won the Venlo “Series of Poker” Main Event earlier this year), but both were to be casualties as the money bubble approached late on Saturday evening.

Play for the first of the two scheduled days came to a halt when Kees Aerts bust Wolfgang Siepmann in fourteenth place K♣ J♦ > K♦ 3♣ – bursting the bubble at the same time – and the thirteen remaining players returned on Sunday afternoon, assured of a €1,193 min-cash, but aiming for the first prize – which at the time was €21,245.

It took more than three levels of play to reduce the field to a final table – during which time overnight chip leader Freerk Post had increased his substantial chip lead over the rest of the field – partly courtesy of busting Oliver Grajewski in eleventh place J♣ J♠ > 7♣ 7♠ – and he had more than 35% of the chips in play when the final nine players took their seats.

Penna Stays Alive with a Rivered King, but Slips Alarmingly

With blinds of 4,000/8,000 (ante 1,000) when the final table got underway, seven of the nine remaining players had fewer than twenty big blinds, and consequently the action was fast and furious. Yong Yun Siow was the first to depart when his pocket Deuces failed to hold against Bacchus´ A♠ Q♣ and Freerk Post extended his lead further when sending Mark Rink to the rail in eighth place A♥ 10♣ > 9♠ 9♦.

Raffaele Penna survived elimination by the skin of his teeth when spiking the K♠ on the River to double up against Freerk Post K♣ J♠ > A♦ Q♥, but Stieven Razab-Sekh was not so fortunate when shoving with A♠ K♥ – and failed to connect with the board against Bacchus´ 6♣ 6♦. However, Raffaele Penna´s lucky escape did not immediately lead to greater things, as he doubled-up Nick van Veghel A♦ 8♠ > J♣ J♠ prior to doubling up Kees Aerts 5♣ 6♣ > A♦ K♣; and, when the six remaining players returned from the dinner break, Penna was left with 59,000 chips, with the blinds now at 8,000/16,000 (ante 2,000).

Raffaele Penna wasted no time in starting his recovery – gaining his revenge and doubling up against Nick van Veghel A♥ 7♥ > 10♠ 10♥. Nick van Veghel was subsequently bust in sixth place by Bacchus Q♠ Q♣ > A♠ J♠, but Penna was a man on a roll – and after doubling up against Freerk Post K♣ J♣ > A♦ Q♥, he doubled-up again against Post with a turned Jack-high straight (8♦ 9♦ > A♠ J♣) to incredibly move into the chip lead.

Kees Aerts – who was unlucky to be bust in fifth place in the first event of the Venlo Poker Series – again finished in fifth place – but this time in more conventional circumstances; moving all-in with A♦ 10♠, but failing to find the Ace he needed to improve past Stefan Correlje´s K♥ K♦. After Aerts´ departure, and with the average stack now just 21 Big Blinds, the four remaining players agreed to a four-way deal that would see each pick up €12,281.

Penna is the Main Man with Queens (!)

With a Dutch Poker Open ticket, the trophy and some flowers still to play for, the game did not develop into an all-in-every-hand frenzy as suggested by Raffaele Penna, but it was wrapped up within 30 minutes.

Bacchus was the first of Penna´s victims – Penna´s A♥ Q♠ flopping a pair of Queens and improving to trips on the Turn to best Bacchus´ K♣ J♣, and Raffaele Penna then took a 7:1 chip advantage into the heads-up against Freerk Post when busting Stefan Correlje in third place with a flopped pair of Queens (A♣ Q♣) against Correlje´s pocket Threes.

Queens were also involved in the final hand, but this time Raffaele Penna had to wait until the Turn to pair his Q♠ 3♣ against Freerk Post´s 10♦ 10♥, as the board ran out 6♠ J♥ 7♠ / Q♣ / 2♦ to give Penna a remarkable victory after he was reduced to fewer than four big blinds before the dinner break.