Bertolucci made a late run to top Day 1b of the World Poker Tour Venice, although he only managed to finish second overall from the two opening flights of the main event. 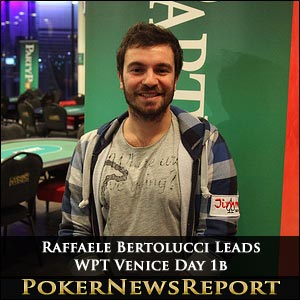 Italy’s Raffaele Bertolucci made a late run to top Day 1b of the World Poker Tour (WPT) Venice, although he only managed to finish second overall from the two opening flights of the €3,000+€300 buy-in main event at Casino Di Venezia in Ca’Noghera.

The 78 entrants for Day 1a left organisers slightly disappointed with the turnout, but Day 1b attracted a much healthier 135 players to take the total starters to 213, including 18 re-entries from the first day’s flight.

With 66 players surviving Day 1b, as well as 29 from Day 1a, we shall see 95 players return today, including this year’s WPT Bratislava winner Roberto Romanello (133,200 chips), of Wales, and the current WPT Venice champion Alessio Isaia (68,700), from Italy, who sits just above the average chip count of 67,263.

Hovering around the middle of the field late in Day 1b, Bertolucci – who is something of an unknown on the live poker scene with only $9,787 winnings – made his move during level nine when involved in a three-player all-in pot.

The A♠ on the river ensured that Bertolucci would enter Day 2 in second place on the chip leaderboard behind Dato.

However, eighth-placed Welshman Romanello seems to feel this tournament is his for the taking, if his comments are anything to go by.

The Swansea player said: “I am the table captain – there is only room for one boss on this table.”

Among the big-name pros who failed to negotiate their way through Day 1b were Cecilia Pescaglini, the WPT Malta runner-up, John Eames, Oleksii Kovalchuk and Max Pescatori.