Rafael Nadal Serves a Win for Charity in Zoom Poker

No. 1 ranked tennis star Rafael Nadal took on the world at Zoom Poker yesterday and emerged the winner after one hour of action at the play-money tables. 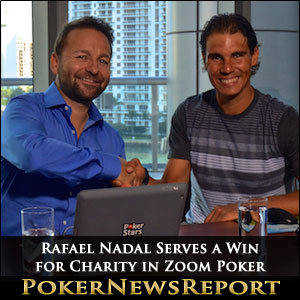 No. 1 ranked tennis star Rafael Nadal took on the world at Zoom Poker yesterday and emerged the winner after one hour of action at the play-money tables.

With Team PokerStars Pro Daniel Negreanu seated beside him, Nadal answered questions volleyed at him from players and fans while concentrating on fast-fold Zoom Poker play at the world’s top poker site. Though English is not his first language, the Spaniard abandoned his native tongue to answer questions in English throughout the live webcast.

Similar to a tough match on the tennis court, Nadal and his Zoom Poker opponents at the six-man tables rallied extensively over the course of the 60-minute competition. Since the tennis champ was facing five players at once, each hand he won on the virtual felt was worth two points, while his tablemates were awarded one point for scooping the pot.

The game changer near the end of the match was a pair of Queens in the hole that Nadal played to perfection. He shoved his play money chips into the middle pre-flop and had several callers who were determined to unthrone the champ. The Queens held and when the allotted one hour of competition was over, Nadal had racked up 20 points to the 18 of his fast-fold opponents.

PokerStars had promised to donate $100 to Care International for each hand won by Nadal during the charitable event. In a show of generosity not out of character for the globe’s most popular poker website, PokerStars instead decided $5,000 would be a worthwhile amount to donate following the entertaining event.

Negreanu continues to be impressed both with Nadal’s humility and his progress at the game of poker, hinting that the tennis star may have a new career to fall back on once he hangs up his racquet. KidPoker told PokerStars blog that Nadal’s success on the felt is not surprising to me because, like a number of the world’s top athletes, Nadal is extremely driven and doesn’t like losing.

Now that Nadal has proven victorious over the world in play-money poker, his next opponents will be on the tennis court of the Sony Open in Miami over the weekend. Good luck to Rafa and kudos to PokerStars for staging a fun online poker event in the name of charity.