Rafa Nadal to Take on the World at Poker – for Charity 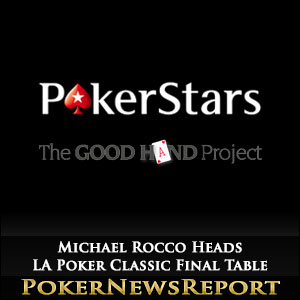 Back in January, Rafa Nadal conquered all-comers in Spain in an hour-long televised heads-up Zoom challenge, during which he answered questions put to him by players and those watching from the rail. Nadal´s score of 50 -v- 25 cost PokerStars a €3,000 donation to the poker charity The Good Hand Project which kelps young people in Spain find work, and the venture was such a success that PokerStars and Nadal are getting back together again to take on the world at poker –  for charity.

Rafa Nadal is currently in Miami to play in the Sony Open (formerly the Miami Masters) and, as Nº1 seed for the event, has a bye through to Saturday´s second round. While is resting between training sessions, PokerStars´ players from all over the world are being offered the opportunity to take him on at the play money tables on PokerStars Facebook app PokerStarsPlay, ask him questions about his game and again raise money for charity.

Where and When to Take on Rafa

This afternoon, Rafa will be taking on the world in a 6-Max Zoom Challenge on the 5/10 play money tables on PokerStars in an event that will be simultaneously be broadcast on PokerStars.tv. Players on the Facebook app PokerStarsPlay will be able to take part in the challenge as will those on the play money tables of PokerStars.net and PokerStars.com. Commentary on the event will be provided by Daniel Negreanu – who has flown into Miami especially for the occasion – and Jonathan Duhamel is expected to compete in the event (if he can get a seat) after laying down this challenge.

Rafa will be at the tables from 5.30pm – 6.30pm (Eastern Time) with worldwide local start times as follows:

The event can be watched live on PokerStars.tv (desktops and tablets) and on the Facebook app, or watched later on PokerStars YouTube channel.

Who Benefits from the Challenge?

Daniel Negreanu will be keeping count of the number of hands Rafa Nadal wins – and how many are won by players from the rest of the world after the flop – and, at the end of the hour a winner will be determined (either Nadal or the Rest of the World). PokerStars will contribute $100.00 for each hand won by the “winner” and donate the cash to Care International – a global charity that supports projects to relieve poverty and provides humanitarian aid in times of emergency.

Just before he flew down to Miami to commentate on the challenge, Daniel Negreanu said,

Rafa’s poker knowledge and skill level has improved dramatically since he started learning the game. I’m looking forward to seeing if he can make this a hat-trick of wins, having already taken down the charity tournament at EPT Prague and beating players from across Spain.