There could be an explosive finish to the WPT Rolling Thunder Main Event, as Quoc Pham and Preston Harwell have 72% of the final table chips between them. 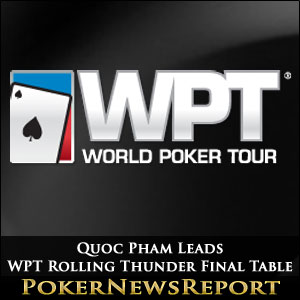 There could be an explosive finish to the WPT Rolling Thunder Main Event, as Quoc Pham and Preston Harwell have 72% of the final table chips between them.

The penultimate day of the WPT Rolling Thunder Main Event was quick and decisive. The field of 465 players who had ponied up the $3.500 buy-in over two opening flights had been reduced to twenty-four players by the beginning of Day 3, and it took less than four levels of play yesterday to play down to a final table of six.

When the six surviving players return this evening to the Thunder Valley Casino in Lincoln, California, there promises to be an equally explosive climax to the event – with Quoc Pham and Preston Harwell having 72% of the chips in play between them – and three players starting the final table with fewer than 25 Big Blinds.

Not a Good Day to be a Chip Leader

Day 3 started with three players dominating the chip counts – Bryan Campanello, Chad Eveslage and Benjamin Zamani – but, as the day progressed, new challengers emerged for the $302,750 first prize. Campanello´s chip stack was halved by Quoc Pham´s Ace-high Flush before he was eliminated by Preston Harwell K♥ K♦ > A♦ Q♥, while Chad Eveslage was busted in eighth place when he ran his pocket Jacks into the pocket Aces of Ryan D´Angelo.

Benjamin Zamani managed to survive the day, but he enjoyed a little good fortune to double up against Preston Harwell K♦ K♠ > 9♦ 8♦ following the flop of 7♦ 4♦ 4♥; and Zamani only completed the day with a bigger chip stack than he started with courtesy of busting out Ryan D´Angelo in seventh place A♣ J♦ > 9♣ 8♥.

Harwell Takes Control – but Gets Bluffed out of Chip Lead

For most of Day 3 of the WPT Rolling Thunder Main Event Preston Harwell was bossing the event. He started the day by eliminating Michael Rocco A♠ 9♦ > K♥ 9♥, and then accounted for Brendan Shane A♥ J♥ > A♠ 4♥ before knocking Bryan Campanello out of the tournament (above).

He then hit a hot streak and busted out three players in the space of thirty minutes – Keven Stammen in fourteenth (A♣ Q♣ > 7♥ 7♠), Dylan Hortin in twelfth place (K♥ K♠ > 4♣ 4♦) and Ardavan Yazdi in eleventh (Q♦ 10♥ – flopped trip Tens – > A♦ K♠). His chip stack at one stage grew to over 5 million chips when he took three streets of value against Ryan D´Angelo with a set of Aces, but he eventually had to settle for second place in the overnight chip counts after being bluffed out of a massive pot by Quoc Pham.

Quoc Pham´s ascendancy into the chip lead was far less sensational – indeed, he got to the top of the leaderboard without eliminating a single player during Day 3 of the WPT Rolling Thunder Main Event! Other than slicing Bryan Campanello´s chip stack in half, Pham had been pretty anonymous throughout the first couple of levels, but he came to life when the last seven players congregated around one table.

When play resumes at the Thunder Valley Casino, the six remaining players will have around thirty minutes to play in Level 25 (blinds 15,000/30,000 – ante 5,000). An interesting seat draw has seated Preston Harwell to the immediate left of Quoc Pham, and this should ensure an explosive encounter throughout the early levels of the final table.