Mark Sandness took down the Mid-Stakes Poker Tour Main Event at Running Aces Harness Park in Columbus at the weekend amid claims of collusion and soft-playing. 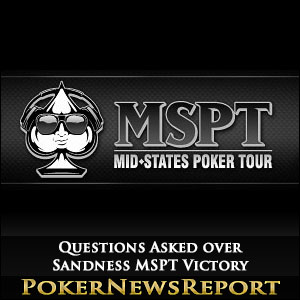 Mark Sandness took down the Mid-Stakes Poker Tour Main Event at Running Aces Harness Park in Columbus at the weekend amid claims of collusion and soft-playing.

The first leg of the 2014 Mid-Stakes Poker Tour (MSPT) concluded on Sunday in controversial circumstances, after claims were made that Main Event winner Mark Sandness and runner-up Blake Bohn colluded throughout the final table and engaged in soft-playing when the tournament went three-handed to ensure they met each other in the heads-up.

The allegations of collusion were fuelled by claims that both players had a percentage of each other´s action and that, during an unscheduled break in the final table action, the two players were separated from each other by MSPT President Bryan Mileski. The move was apparently due to comments that were already circulating the Twittersphere and made in the live stream chat box regarding the two players betting actions.

Many of the claims regarding the cooperation between Sandness and Bohn focused on three specific hands during three-handed play. Sandness and Bohn were both well-stacked in comparison to the third player at the table – Tyler Caspers – and it would appear that both players were intent on preserving their stacks rather than take any risks to gain a commanding advantage.

Hand 1: Bohn has Queen-Nine on a Queen-high flop in a hand against Sandness. He decides to check the board down to collect the small pot containing just the chips from the pre-flop betting.

Hand 2: Bohn raises from the Small Blind with King-Ten (off-suit). Sandness in the Big Blind has King-Jack (suited) but declines to make the call despite having the better odds and position, and folds his hand.

Hand 3: On a board of Two-Four-Six / Seven, Bohn shoves all-in with pocket Sixes (for a set) and allegedly gives Sandness a look and a nod. Sandness – who has Six-Two for flopped two pairs – folds his cards.

Caspers eventually bust in third place when he shoved the last of his chips into the middle with Q♥ 9♦ and failed to improve past Blake Bohn´s A♠ Q♣. After his elimination, Caspers reportedly said that he felt the other two players cheated to prevent him from finishing in a higher position, with one player on the rail commenting that it was clearly 2 vs 1.

To compound the claims of collusion, the heads-up play lasted just two hands. Blake Bohn had gone into the heads-up with a significant chip advantage following Caspers´ elimination, but Mark Sandness doubled-up in the first hand 6♣ 6♠ > 4♠ 4♥ to take the chip lead.

In the second hand of the heads-up, Bohn shoved all-in with 5♦ 4♦ following a flop of 6♣ 6♦ 3♠. Sandness made the call with A♣ A♦, and the A♠ on the Turn gave him an unassailable Full House against Bohn´s missed open-ended straight draw.

The contrast between the soft-play of the three-handed action and the quick conclusion of the heads-up left conspiracy theorists on the 2+2 poker forum spitting feathers, and saying that it was a disgraceful performance by Blake Bohn – particularly as he is one of three professional players sponsored by the Mid-Stakes Poker Tour.

MSPT President Bryan Mileski has stated that the whole recording of the MSPT Running Cards Main Event final table will be uploaded onto the site´s website when the Tour arrives in Baton Rouge for the second leg of the Mid-Stakes Poker Tour later this week.

354 players had ponied up the $1,100 buy-in or qualified for the MSPT Main Event at the Running Aces Card Room at Harness Park in Minnesota, with the top 36 players cashing in the event. Mark Sandness captured the first prize of $90,913, with the payouts for the remaining players who made it to the final table looking like this: