Event number 4 in the World Series of Poker Europe is a new bracelet event for the series – a three-legged shootout. 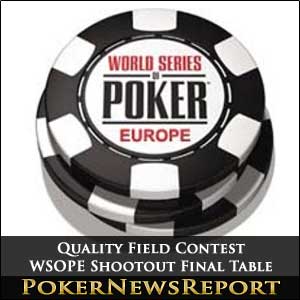 Event number 4 in the World Series of Poker Europe is a new bracelet event for the series – a three-legged shootout.

Leg one consisted of 258 players battling it out over 30 Sit and Go tables, where only the winner progress to the next round. The victors of each table carried their chips forward into round 2, which consisted of ten 3-handed tables – the winner of each progressing to today´s final ten-handed table.

Those 258 players who entered the €3,200 buy-in tournament, created a prize pool of €743,040 and each first day victor was assured of receiving €6,913 for triumphing at the their initial tables. Those who have progressed through to today´s final table are guaranteed a minimum of €12,981, but each of the ten players will have their aims set much higher – with a Championship bracelet and cheque for €182,000 at stake.

As the players retain the chips they won during the first two legs of the tournament, the chip stacks at the beginning of the final table are fairly similar. Those that battled through a ten-handed initial table will have more than those who played on an eight- or nine-handed table, as will those who beat players who had won on ten-handed tables in the second round. The range of chip stack sizes is therefore very narrow between James Dempsey´s 230,000 and Max Silver´s 246,000. However, because the size of the stacks blinds start on the final table at 1,500/3,000 and there is an initial ante of 500 chips.

A World Class Field in Action

As you may expect, to win a full ring game and then a three-handed SnG, takes a great amount of skill, and between the “short-stacked” James Dempsey and marginal chip leader Max Silver, there is a fantastic wealth of international poker talent. European Team Captain for the Caesar´s Cup, Bertrand “ELkY” Grospelier and EPT Pro/Am victor Steve O´Dwyer are joined by US professional Tristan Wade, WPT Bratislava winner Richard Toth, Emil Patel, John Armbrust, Taylor Paur and Michael Watson – all of whom have a wealth of experience of top level tournament competition.

Talking of the Caesar´s Cup

The Caesar´s Cup is a freeroll made-for-TV event which will take place after the conclusion of the WSOPE Main Event (you can read more about it here). ELkY is having no trouble with his team of Miniieri, Hansen, Cody and Lykov, but American captain, Phil Hellmuth,  has already had two of his players run away scared withdraw from his team. Huck Seed and Doyle Brunson have now had to be replaced by Jason Mercier and Ben Lamb who, although not short of top level experience, maybe lack the guile and cunning of the players they have replaced to help their team gain revenge for their 2009 thrashing at the hands of Annette Obrestad (!). Time will tell if these are wise substitutions or not.