PokerStars has announced that the next $1 million freeroll tournament will be played on Sunday October 9 and started running qualifying challenges. 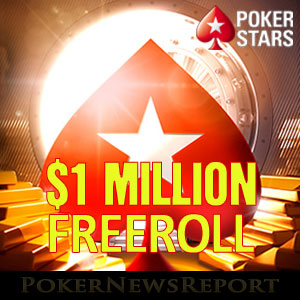 PokerStars has announced that the next $1 million freeroll tournament will be played on Sunday October 9 and started running qualifying challenges.

When [geolink href=”https://www.pokernewsreport.com/pokerstars”]PokerStars[/geolink] made significant changes to its VIP program last year, the site promised it would replace the quarterly Super-Nova tournaments with $1 million freeroll tournaments that were open to everybody. To date, the world´s largest online poker site seems to be keeping its promise.

Following two hugely successful events in March and July, the third $1 million freeroll tournament will be played on Sunday October 9 at 12:04pm (ET) and guarantee $10,000 to the winner. However the term “freeroll” is not exactly accurate, as players have to win their seats in a two-stage qualification process.

How to Qualify for the PokerStars $1 Million Freeroll

Each day until Thursday October 6, PokerStars is asking players to complete a simple challenge. The challenge can be as straightforward as playing x hands of real money poker or competing in a Spin & Go hyper-turbo game. Once the challenge is completed, players are automatically entered into an All-In Shootout tournament the following morning at 7:04am (ET).

Players do not have to physically play the daily All-In Shootout tournaments. Every player is all-in every hand until 8,192 players are left – all of whom win seats to next Sunday´s $1 million freeroll tournament. Players who win seats are automatically registered into the target event and will receive a message congratulating them on their achievement when they next log into their accounts.

In a slight change from the previous two $1 million freeroll tournaments, players who have already qualified for the October 9 event will be automatically unregistered any remaining All-In Shootouts they qualify for. This is to give as many players as possible the opportunity to win a seat in the target event by reducing the number of players in the later Shootouts.

Players who have not completed any of the challenges – and those who have failed to win a seat via the All-In Shootout tournaments – will have one last chance to qualify for the $1 million freeroll tournament in a skill-based qualifier on Saturday October 8 at 12:04pm (ET). In order to qualify for the Last Chance Skill Qualifier, players will have to complete a special challenge on Friday October 7.

A Few Things for Players to Remember

Although players are entered into each day´s All-In Shootout automatically, players who qualify for the Last Chance Skill Qualifier have to register manually for the Saturday event. Please note that entry for this event is capped at 45,000 players, so complete the special challenge early and register straightaway!

In order to play in the PokerStars $1 million freeroll, you must be a real money player who has made at least one deposit into your PokerStars account. Play money players – including those who have purchased play money chips – are not eligible for this promotion.

In addition to the qualifiers for the $1 million freeroll, PokerStars has just launched a Cardmatch promotion for players playing at the site´s Zoom Poker tables. The nature of the promotion varies according to which PokerStars site you play on (.com, .eu, .es, .uk, etc.), but effectively what you have to do is match your hole cards to the cards displayed on a special game card to win a random prize.

The prize values vary from $0.50 (€0.25 on .eu sites) up to $1,000/€1,000, and you can win up to three prizes a day. The cash amounts you win are automatically added to your bankroll – you do not have to apply for them or clear them in order to use the funds or withdraw them. Further details of the Cardmatch promotion can be found on the PokerStars website.