The editor of a report into the future of gambling in South Africa has said that the prospects for legal online poker and other casino games are remote. 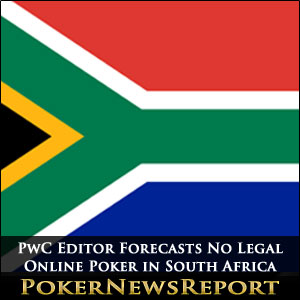 The editor of a report into the future of gambling in South Africa has said that the prospects for legal online poker and other casino games are remote.

PriceWaterhouseCooper´s “Gambling Industry Leader” – Nikki Forster – made the comments at a press conference in Johannesburg launching the company´s “Gambling Outlook: 2014 – 2018” – the third in an annual series of reports charting the progress of gambling in South Africa, Nigeria and Kenya.

Although the report suggests that gambling revenues in all three countries will continue to increase over the next few years, Ms Forster is convinced that online poker in South Africa and other online gambling activities will remain a grey area all the time that the Department of Trade and Industry fails to use the framework in place to license Internet-based operators.

Online gambling in South Africa is considered to be a grey area due to the 2008 amendments to the country´s National Gambling Act which allows the Department of Trade and Industry to license online operators and regulate the market. However, the amendments are still subject to a legal challenge from South Africa´s land-based casinos and other interested parties.

The authorities in South Africa are also waiting for an appeal to be heard in the 2010 case of Casino Enterprises (PTY) Ltd -v.- the Gauteng Gambling Board, in which the Piggs Peak Casino was banned from offering an online casino product to its customers. The judge´s ruling also made it illegal (subject to appeal) for operators outside of South Africa to offer online poker or any other form of Internet gambling.

The prospects for legal online poker in South Africa and other forms of Internet gambling were dealt a blow in the country´s parliament last month, when – according to BDlive.co.za – the Department of Trade and Industry introduced proposals to permanently ban all forms of online gambling and restrict existing forms of authorized gambling. According to a government spokesperson, the proposals would help address a high level of problem gambling in the country.

However, opponents to the government´s plans argue that the state has no right to impose a blanket ban on online gambling throughout the country. Jurisdictions in South Africa operate in a similar way to the individual states of the US and have a degree of autonomy over whether to allow online gambling. A spokesperson for the Democratic Alliance – the party currently in opposition in South Africa – said:

That is a very, very bad decision. I fiercely disagree with that view. It is completely shortsighted to say that it is better for South Africans not to be allowed to gamble online when there is patently significant demand in the country to do that. It is for government to facilitate that in the safest way possible.

The proposals to ban Internet gambling still have to go through South Africa´s Policy Council, after which they will be submitted to the Cabinet for approval. Should the plans to prohibit online poker in South Africa be approved, there is then a period of public consultation before the draft bill goes before parliament for a vote.

Countering Trends throughout the World

According to PwC´s Nikki Forster, the government´s reluctance to issue online gambling licenses runs counter to trends in most parts of the world. Ms Forster pointed to recent regulation in the US and UK and commented that revenues from the online market in the UK were significantly larger than those generated by the brick-and-mortar casinos. She added:

There is hesitation from government. In the last month, the Department for Trade and Industry has said it doesn’t support online gambling and it doesn’t believe it creates jobs and it could add to gambling addiction problems. Based on these messages, I don’t see anything happening for quite a period of time.

It looks as if South Africa will continue to be a grey area for a considerable period of time.