According to a report in the Irish Independent, problem gambling in Ireland has increased by 250 percent in recent years allegedly due to mobile gambling. 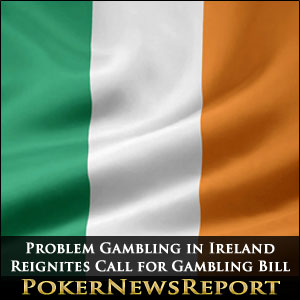 According to a report in the Irish Independent, problem gambling in Ireland has increased by 250 percent in recent years allegedly due to mobile gambling.

The report in the Irish daily newspaper is based on a study conducted by Aiseiri – an organisation founded in 1983 to assist addicts of all persuasions to recover from their illnesses. The newspaper report claims that one-in-four gambler admissions to Aisieri´s addiction treatment centres are due to the availability of online gambling through Smartphones, iPads and tablets.

Unfortunately for the credibility of Aiseiri´s study, the Irish Independent´s reporting is sensationalist and unsympathetic – with many of the study´s key findings taken out of context. However, one benefit to derive from the newspaper´s coverage of problem gambling in Ireland is that it has reignited calls for the Government to introduce a long-awaited gambling bill.

A proposed bill to replace the existing Betting Act 1931, the Gaming and Lotteries Act 1956 and sections of the Finance Act 1992 was introduced last July by Alan Shatter – Ireland´s Minister for Justice, Equality and Defence. Among the proposals included in the Gambling Control Bill 2013 was legislation to regulate online gambling and introduce a Social Gambling Fund from a levy on operators.

Proceeds from the Social Gambling Fund would be used to pay for research into problem gambling in Ireland, provide treatment for gambling addicts and increase the amount of education and information that is currently available. It is estimated that a 1 percent levy on Gross Gaming Revenues would raise €5 million towards protecting the young and vulnerable from issues associated with problem gambling.

Following the introduction of the proposed bill, a public consultation process was conducted in October 2013, where little opposition to the Gambling Control Bill was voiced. A report was made to the Houses of the Oireachtas (the Irish House of Deputies and Irish Senate) the following month, which highlighted required changes to the proposed legislation, but since then the Gambling Control Bill appears to have been gathering dust.

The Most Destructive Addiction

The author of Aiseiri´s study – Paul Mullins – referred to gambling addiction as “the most destructive addiction”. Unlike other addictions, those with gambling problems in Ireland do not generally seek help until they are facing financial destruction and have accumulated huge debts. He told the Irish Independent that Aiseiri have devised special programmes to help gambling addicts in order to cope with the increasing level of people the organisation is helping.

Pathological gambling was first recognised as an illness in 1980 when it was included in the Diagnostic and Statistical Manual of Mental Disorders. Subsequent research into problem gambling conducted throughout the world suggests that most problem gamblers do not recognise that they have an addiction until it is too late – unlike smokers, for example, who acknowledge that smoking is bad for their health and take steps to stop smoking or reduce their intake.

Our advice to people who are worried that they might be developing a gambling problem – or people whose lives are impacted by an addictive gambler – is to visit the pages of HelpGuide.org, a non-profit website which explodes some of the myths associated with problem gambling, and which provides sympathetic and practical advice about identifying signs of gambling addiction and where to find help.

The Aiseiri study – although misrepresented in the Irish Independent – would seem to contradict previous findings related to online gambling and gambling via mobile devices. Earlier this year, the Harvard Medical School´s Division on Addiction produced a report that confounded critics of online gambling, by concluding that the prevalence of pathological gambling had remained stable since it was first identified as an illness in 1980 “despite the increase in opportunities and access to gambling”.

The Harvard report supported previous research conducted by eCOGRA – the organisation for e-Commerce and Online Gaming Regulation and Assurance – who, in 2007, concluded that “the vast majority of [online] players enjoy this form of entertainment responsibly”. Both the Harvard and the eCOGRA studies were conducted using a significantly larger sample than was available to Aiseiri.

Nonetheless, the issue of problem gambling is one that should be taken very seriously, and one that the authorities in Ireland would do well to address at the first possible opportunity. The social costs of gambling affect not just individuals and their families, but everybody with whom the addicted gambler comes into contact – including other players at online poker tables.