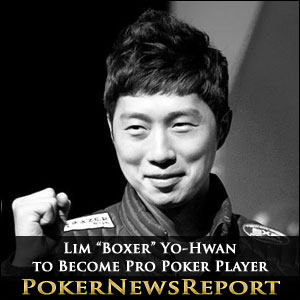 In South Korea, the game of StarCraft draws nearly as much attention as tournament poker does in the United States and Europe. In fact, select Korean television stations broadcast competitions between top players on a regular basis. Embracing the same spirit of competitiveness and player anticipation as live tournament poker, StarCraft has served as a launching point for several prestigious poker careers, Bertrand “Elky” Grosspellier’s included. And now another top player, the iconic Lim “BoxeR” Yo-Hwan will be joining those who made the transition from the competitive video gaming world to professional poker.

Yo-Hwan currently earns approximately half-a-million US dollars per year from competing in StarCraft tournaments and via his sponsorships. He’s treated like a celebrity in his native South Korea, and is known to mingle with other high-profile figures, including his girlfriend, actress Kim Ga-yeon.

Beginning in 2014, Yo-Hwan will participate in a series of big buy-in events, including bracelet events at the WSOP. He also plans on playing several events in the Asian Poker Tour. Lim, like Elky before him, believes that there are many similarities between No Limit Holdem and StarCraft, in that they both require players to read their opponents and exploit their tendencies.

Given Yo-Hwan’s prior involvement in the poker world, his transition to professional poker player comes as little surprise. He already promotes a free-to-play social poker room entitled “FullPotPoker,” and his world renowned status should make it easy for him to pick up pro status sponsorship from at least one major site.

How Yo-Hwan will fare on the tournament circuit is yet to be seen. His talent is unquestionable, but the wear and tear suffered from years of competitive gaming has begun to take its toll. In an interview, Lim noted that he is plagued by spinal pain and pain in [his] wrists, waist, neck and everywhere. Given this, Lim’s ability to withstand grueling 14-hour days may be limited.

Cross promotions between the gaming and poker worlds are not uncommon. Back in 2011, Full Tilt Poker sponsored an inter-disciplinary competition juxtaposing fast fold poker with first person shooters. A year earlier, PokerStrategy sponsored an eSport tournament. And more recently, daily fantasy sports giant DraftKings forged a partnership with the WPT.

Back in 2006, Lim Yo-Hwan defeated Elky in a prestigious StarCraft event. Will the two ever meet on the poker felt, and if so, who will reign victorious?