Speakers in favour of Joe Barton´s Internet Poker Freedom Act presented their case well at the US House of Representatives subcommittee hearing yesterday. 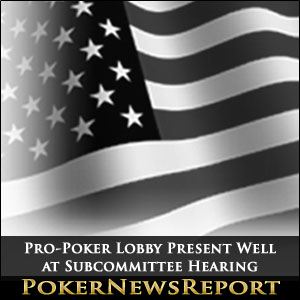 Speakers in favour of Joe Barton´s Internet Poker Freedom Act presented their case well at the US House of Representatives subcommittee hearing yesterday.

On Tuesday, the US House of Representatives subcommittee on Commerce, Energy and Trade were in session to discuss “The State of Online Gaming” and, more specifically, the latest attempt by Republican Congressman Joe Barton to introduce H.R. 266 “The Internet Poker Freedom Act”.

The subcommittee heard five minute speeches delivered by parties both for and against Federal legislation, with Kurt Eggert and Rachel Volberg also contributing opinions on their specialist subjects – consumer protection and problem gambling.

Pappas and Freeman Have All the Answers

Two well-prepared and excellently delivered presentations by John Pappas – the Executive Director of the Poker Players Alliance – and Geoff Freeman – President and Chief Executive Officer of the American Gaming Association – were listened to carefully by the subcommittee members, before the floor was opened for a question and answer session.

During the Q&A session, Pappas knowledgeably answered questions relating to age verification, consumer protection and problem gambling; and gave examples of how regulation within Nevada, New Jersey and Delaware had overcome these issues. He also referred committee members to the successful regulation of the online poker market in Europe.

In contrast, Andrew Abboud – representing the Las Vegas Sands Corporation and billionaire CEO Sheldon Adelson – requested that the Government shut down illegal online poker sites and “restore” the Wire Act, while Les Bernal – the National Director of Stop Predatory Gambling – gave an unconvincing presentation; likening online poker to paying to play for video games with no chance of winning.

Abboud suffered badly during the Q&A – twice being asked why the corporation he represented promoted online gambling to customers staying at Sands Corporation-owned hotels. He was also battered for using the argument that online poker eliminated “human interaction” before time ran out and he could not embarrass himself any further.

Eggert and Volberg Look for Safeguards

The presentations given by Kurt Eggert and Rachel Volberg were neither for nor against Federal legislation of online poker – although both voiced concerns about consumer protection and problem gambling, and the measures they would like to see in place to deal with these issues -Professor Volberg specifically requesting that a fund be established from gambling tax proceeds to conduct further research into gambling addictions and treatments.

Unfortunately, Mr Eggert demonstrated a noticeable lack of knowledge about the skill that is involved in any form poker – advocating that players should be graded to compete against players of a similar level and referring to the New York Times (as a credible source) when issuing a warning about the use of poker bots. However, he did tend to support many of the control measures already in place in the three States in which online poker is now regulated.

Subcommittee Chairman, Lee Terry, wrapped up the hearing after 90 minutes – advising the six “witnesses” that had made presentations that they would each be receiving written questions over the next couple of weeks from members of the subcommittee, and that he would appreciate their replies within fourteen days so that the “important issue” of the Internet Poker Freedom Act could be dealt with swiftly.

Mr Terry added that it had been a good discussion and, in light of the Justice Department´s most recent interpretation of the Wire Act, the possibility of Federal gambling legislation should be investigated thoroughly.