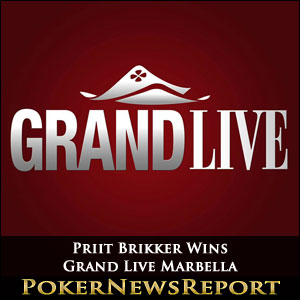 Well-known Estonian poker players do not spring to mind that easily, and you have to go back to 2012 to find the last time an Estonian poker player won a live poker event outside of Tallinn, but few players who attended the climax of the Marbella Poker Festival will forget the hot run that Priit Brikker enjoyed to win the Grand Live Marbella.

As a poker tour, the Grand Live is growing in popularity with every leg, and 162 players ponied up the $1,100 buy-in or qualified online to play in the Grand Live Marbella Main Event. After two days of action just nine players remained, with German player Tillmann Raschke having a narrow advantage over Priit Brikker – the two players having nearly half the chips in play between them.

The final table of the Grand Live Marbella started well for Gerry Kane, who doubled up against Priit Brikker K♣ K♦ > J♠ J♦ in one of the first hands of the day, but as the blinds rose to 50,000/100,000 (ante 10,00) players started to depart in rapid fashion.

Jorge Juste was the first player to be eliminated when his A♠ Q♦ failed to improve past Tillman Raschke´s pocket Jacks, and Juste was quickly joined in the Marbella sunshine by Charles Chattha (K♦ Q♥ < Tillmann Raschke´s A♠ J♦) and Gerry Kane 6♣ 6♠ < Priit Brikker´s A♦ 10♦).

Former Grand Live Malta winner Janos Katzenberger improved his chances of being the first dual Grand Live winner by doubling up against Tom Carpenter A♥ 8♦ > A♠ Q♦, and Carpenter was the next player to leave in sixth place when running his A♠ Q♠ into Arkadiusz Rasiak´s A♥ K♥.

Brikker Moves into the Lead – and then Gets Lucky

After Arkadiusz Rasiak had busted Dennis Frankerberger in fifth place K♠ 6♦ > A♦ J♦, Janos Katzenberger emerged as Priit Brikker´s main challenger – twice taking valuable pots from Tillmann Raschke with substantial river bets – but Katzenberger´s run came to an abrupt halt in a hand which gave Brikker a massive chip advantage over the rest of the final table:

Janos Katzenberger was a 93% favourite to double-up into a substantial lead, but the A♥ spiked on the River to send the Hungarian to the rail in fourth place and give Priit Brikker three-quarters of the chips in play.

Priit Brikker´s elimination of Arkadiusz Rasiak in third place was far more conventional – 9♥ 9♠ > 6♥ 6♠ – enabling him to take a 2.615 million -v- 625,000 chip advantage into the heads-up against Tillmann Raschke. The early exchanges in the heads-up were fairly subdued, but then this happened –

Priit Brikker raised to 48,000 chips in the pre-flop betting and Tillmann Raschke made the call. After the flop of 6♠ 7♠ A♥, Brikker bet out 60,000 chips, Raschke raised to 120,000 chips, Brikker responded by three-betting to 210,000 chips and Raschke moved all-in. Brikker could not get his chips into the middle fast enough and the cards were on their backs:

Raschke: A♠ 9♠ for top pair, a big kicker and a flush draw

Brikker was a narrow favourite in the hand, but had to avoid twelve outs to win the Grand Live Marbella Main Event. Fortunately for the Estonian, his hot run was not about the end, and the 3♥ on the Turn and J♦ on the River sealed his victory and moved him into the all-time Top 10 of Estonian poker players.