The Poker Players Alliance (PPA) has been very busy trying to ensure that U.S. Full Tilt players will be fully repaid and also pushing for federal legislation. 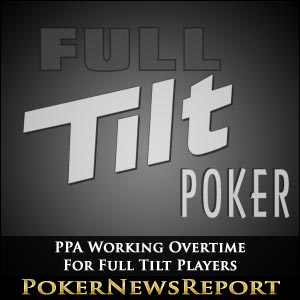 The Poker Players Alliance (PPA) has been very busy trying to ensure that U.S. Full Tilt players will be fully repaid and also pushing for federal legislation.

While the rumor mill keeps churning in regards to whether Full Tilt players from the U.S. can expect their full account balances to be reimbursed by the U.S. Department of Justice (DoJ) or just the amount they deposited at the former 2nd-ranked online poker site, the PPA has been diligently involved in working on the players’ behalf to secure full repayment as well as lobbying for federal legislation.

The PPA wrote a letter late last week to the Asset Forfeiture and Money Laundering Section of the DoJ and offered assistance in the still undetermined remission process in order to facilitate full repayment of U.S. players. The missive was written by attorney Marc J. Zwillinger of the law firm ZwillGen PLLC on behalf of the PPA and promised the establishment of a streamlined, victim-friendly process to ensure that players’ frozen accounts as of Full Tilt’s shutdown last year be paid in full.

The main reasons cited for players to be made whole are that the settlement was brokered with full reimbursement as its intent, PokerStars was permitted to fully reimburse players following Black Friday with no arguments from the DoJ that this was impermissible, and that all non-U.S. players will receive their entire account balances when Full Tilt relaunches in November. Zwillinger’s letter also points out that players the world over were victims of deceit perpetrated by Full Tilt despite being assured that their funds were secure.

Also last week, an op-ed article was written by PPA Executive Director John Pappas and published in Forbes urging Congress to enact online poker federal legislation. Pappas rightfully stated that the U.S. is missing out on tax revenue in the billions of dollars and that the recent settlement between the DoJ, PokerStars and Full Tilt that permits PokerStars to offer [geolink href=”https://www.pokernewsreport.com/us-poker-sites”]online poker in the U.S.[/geolink] in the future is akin to the DoJ endorsing such federal regulations.

The Justice Department could have very easily banned PokerStars and Full Tilt Poker from the United States forever, yet it chose not to, Pappas said. It chose to clearly recognize that online poker can and should be a viable industry in this country.

In the absence of federal legislation for online poker, individual states such as Nevada and Delaware have approved online poker and gambling regulations based on the DoJ’s ruling in December, 2011, finding that the 1961 Wire Act was applicable only to sports betting. When reading between the lines, that ruling, in addition to the settlement allowing PokerStars to enter the U.S. online poker market, means that the DoJ has given its approval for Internet poker twice in the span of seven months. As further stated by Pappas, the DoJ is sending a clear message to lawmakers in Congress that it is time to license and regulate online poker.

The jury is still out on whether U.S.players will be paid in full or if Congress will ever get the support needed to legalize online poker. But the PPA is doing its best to make both happen.