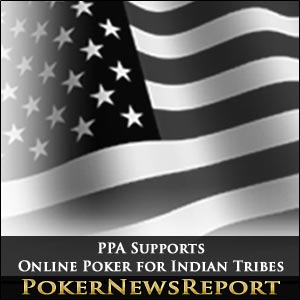 Indian Country has long been an important stakeholder in the American gaming history, D’Amato said in his testimony. The fact that gaming is moving from the casino table to the computer table should not change that. We believe Indian Country should be substantial players in a regulated U.S. market with tribal governments as Federally-recognized licensing bodies.

In testimony offered during Thursday’s Senate pow-wow, it was revealed that Indian casinos are responsible for more than 40% of gambling revenues in America, a statistic that undoubtedly will be taken into consideration when drafting online poker regulations.

One of the tribal delegates, Tulalip Tribe Vice Chairman Glen Gobin, was concerend that online poker would threaten the profit margin of land-based casinos on tribal reservations. Legalization of internet gambling comes at a risk to tribal economies, Gobin said.

D’Amato was quick to note that poker at Indian casinos accounts for only 1% of all tribal gaming revenue and any new online poker legislation would not have an effect on the current revenue of tribal casinos. The idea that internet poker will impact that 1% is not true, D’Amato said. The concerns are thinly veiled.

D’Amato added, The PPA looks forward to working with the committee and Indian Country on this issue. We would like to see tribal gaming enterprises as licensed operators, as well as affiliates and network partners for other licensed operators. In the poker marketplace, PPA speaks for the consumers, and competition is always good for consumers.

D’Amato’s colleague, PPA Executive Director John Pappas, was extremely pleased with D’Amato’s testimony before the Senate. Alfonse D’Amato stole the show, Pappas said. He did a great job. He made it very clear that there is an opportunity for Indian tribes to be a significant player in the internet gaming market. They should be trying to work towards that.

On Friday, the day following the Senate hearing, the House Subcommittee on Commerce, Manufacturing, and Trade also convened to hear testimony in a hearing entitled “Internet Gaming: Regulating in an Online World.” D’Amato offered his opinion on the House hearing. We are pleased with the committee’s commitment to thoroughly explore all angles of licensing and regulating online poker in the U.S., D’Amato said. Hearings like today’s [Friday’s] highlight how a licensed and regulated online poker industry benefits all Americans and we are hopeful members of Congress recognize the urgency of passing the appropriate legislation to get this done.

The protection of problem and underage gamblers was mentioned in Friday’s House subcommittee hearing. D’Amato believes that by looking overseas to see how other online gaming operators are dealing with that problem can help in drafting U.S. regulations. We have the advantage of learning from the effective protections for problem gamblers that many European countries are already implementing, such as the use of technology to monitor and flag players that exhibit signs of problem gambling, D’Amato said.

Follow-up hearings in either the House or Senate have not been scheduled as of yet and no mark-up of bills was announced. D’Amato urged that the sooner online poker legislation is enacted, the better. Tens of thousands of poker players across the country have already expressed their support for a licensed and regulated U.S. online poker industry through direct contact to their lawmakers, forums, and social media outlets, D’Amato added. Now is the time to listen to the voice of American voters and make the right decision for our country’s future.