With the federal Reid-Kyl online poker bill failing to gain support in 2012, the Poker Players Alliance will lobby for online poker at the state level in 2013. 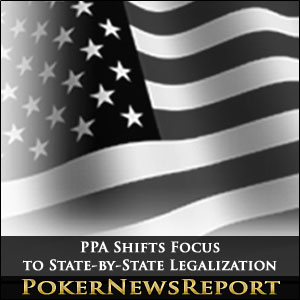 With the federal Reid-Kyl online poker bill failing to gain support in 2012, the Poker Players Alliance will lobby for online poker at the state level in 2013.

Previously focusing their efforts on online poker legislation at the federal level, the PPA will now push for individual states to enact laws permitting Internet poker. That’s not to say that all hope for federal online poker legislation is lost. It just makes more sense for the PPA to spend its time and money where the probability of success is greater.

More and more, the fight for Internet poker is moving to the states, PPA Executive Director John Pappas said. We will be largely focusing our efforts on passing player-friendly bills in the states where legislative action is brewing.

Those states include New Jersey, where the state legislature approved online gambling regulations in late December that await only the signature of Gov. Chris Christie within 45 days for that bill to become a law. PPA lobbying efforts will also be in effect in California, where Sen. Rod Wright reintroduced online poker legislation prior to the year’s end.

Several other states are reportedly sending strong signals that they will also become active in pushing for online poker legalization. The PPA has listed Illinois, Iowa, New York and Massachusetts as states where lawmakers may be readying efforts to introduce Internet poker legislation.

Many agree that a hodgepodge of laws by individual states may not be the best format for U.S. players to once again enjoy playing poker online from the comfort of their homes. But the inaction on the part of federal lawmakers leaves the PPA with no choice, as legislation on the federal front in 2013 also does not look promising. Sen. Jon Kyl has retired, leaving the Reid-Kyl bill without one of its supporters.

PPA is not abandoning Washington D.C., Pappas said. The grassroots organization on behalf of poker players has its headquarters there and will continue to make its presence felt, including working against possible laws that preclude states from enacting their own online poker regulations.

Nevada and Delaware are the only states that have thus far passed forms of online gambling legislation. Nevada’s statute permits poker only and the first legal online poker sites are expected to be up and running sometime in the early part of this year.