The Poker Players Alliance (PPA) sent a letter to Senators Harry Reid and Jon Kyl requesting modifications to the current draft of the online poker bill. 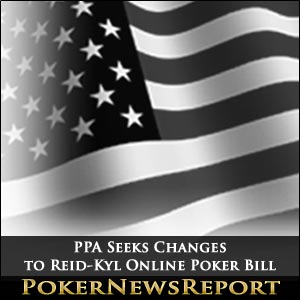 The Poker Players Alliance (PPA) sent a letter to Senators Harry Reid and Jon Kyl requesting modifications to the current draft of the online poker bill.

Dated Nov. 2, the missive was written by PPA Chairman Alfonse D’Amato commending the Senators for their work in attempting to regulate online poker in the United States. D’Amato states that the PPA is “pleased with many aspects of the draft” that protects consumers, provides a solid regime for states to act on their own accord in regards to regulation, generates revenue, and will stimulate the economy by creating jobs.

D’Amato also lists six specific areas where the Reid-Kyl bill can be improved. Chief among these is the requirement that each state legislature must act in order to opt-in to the federal scheme. The PPA believes that states already offering live, non-tribal commercial poker should be considered as opted in without the state legislature having to burden itself with approving such legislation.

The PPA also opposes the 15-month waiting period before operators can begin dealing cards online. Reid and Kyl included that provision so no operator could get a jump on others. D’Amato stresses that such a delay is a long time for both recreational and professional players to wait and that “other countries that have been successfully regulating Internet poker for several years were able” to get a handle on things much sooner than 15 months.

The existing Reid-Kyl draft does not allow for international play and ring-fences U.S. players from expanding player pools beyond American soil. This is perhaps the most short-sighted element of the proposal. The PPA admits that forging agreements with other governments and regulators is time-consuming, but the increased revenue and player liquidity that international competition would allow is a must.

The PPA also would like to see specific rules on player taxation of poker winnings. Federal lawmakers would be well-advised to include a provision in an amended Reid-Kyl bill that would “direct the IRS to formulate guidelines for reporting income from online poker prior to commencement of play,” D’Amato wrote.

Citing increased competition as a solid foundation for Internet poker, the PPA is concerned that the current federal online poker proposal threatens the sovereignty of Indian tribes. The PPA also feels that state lotteries should be allowed to seek Internet poker licensing. Many tribes and state lotteries have vocally opposed the Reid-Kyl draft and the PPA is attempting to placate those groups by suggesting that an amended proposal need to ensure equitable treatment.

Finally, the PPA is against a bad actor provision in the bill that forbids licensing for five years of any online poker providers who serviced the U.S. marketplace following enactment of the Unlawful Internet Gambling Enforcement Act (UIGEA) in 2006. In other words, PokerStars and Full Tilt, who benefited tremendously by remaining in the marketplace. D’Amato calls the five-year ban arbitrary, unduly unfair and possibly unconstitutional. He further states that such a ban will exclude some of the largest and most recognizable brands that have the deepest experience in offering Internet poker services from competing in the U.S. market.