Poker Players Alliance (PPA) has denounced Republican presidential hopeful Mitt Romney’s opposition to online poker as being unaware and misinformed regarding safeguards that will be put in place in any upcoming internet poker legislation designed to protect consumers and players with addictions to gambling. 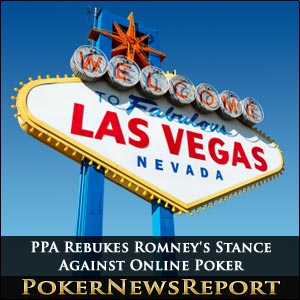 Poker Players Alliance (PPA) has denounced Republican presidential hopeful Mitt Romney’s opposition to online poker as being unaware and misinformed regarding safeguards that will be put in place in any upcoming internet poker legislation designed to protect consumers and players with addictions to gambling.

Romney espoused his anti-online poker beliefs by recently telling a Las Vegas TV station that he cannot support regulated [geolink href=”https://www.pokernewsreport.com/us-poker-sites”]online poker in the U.S.[/geolink] because of the social costs and people’s addictive gambling habits. As the current Republican leader ahead of Newt Gingrich, Rick Santorum and Ron Paul in recent Gallup polls, the main lobbying group on behalf of poker players expressed concern that Romney was perhaps not properly educated in terms of the direction internet poker legislation was headed.

Governor Romney’s statement seems to be based on a misperception of regulation and the status quo, said PPA Executive Director John Pappas. We hope to educate him that regulation will mean strong enforcement and meaningful consumer protections, while doing nothing will only exacerbate any perceived problems he has with gaming.

It is widely believed that any online poker legislation enacted either by individual states or on a federal level will heavily address consumer protection issues and to mandate assistance in the form of counseling as well as a blacklist for players who have shown addictive behavior toward online gambling. As it stands now, there are absolutely no protections whatsoever in place to help Americans who still can log on and play poker online in an unregulated environment.

The PPA believes that federal legislation for online poker would clear up many of the issues that Romney has expressed in his stance against online poker.

I believe Romney has it wrong here, said PPA Executive Vice President of Player Relations Rich Muny. Licensing and regulation will ensure that age verification measures are implemented, consumer protections are provided, and protections for those with excessive gaming habits are mandated. Current law does not provide any protections for anyone.

Another Republican presidential candidate, Rick Santorum, has also spoken out against online poker. I’m someone who takes the opinion that gaming is not something that is beneficial, particularly having that access on the internet, Santorum said recently on the ‘Face to Face’ news program. “It’s one thing to come to Las Vegas and do gaming and participate in the shows and entertainment and that kind of thing. It’s another thing to be able to sit in your home and have access to that. I just think it would be dangerous for our country.

Santorum currently trails both Romney and Gingrich in polling tabulations, garnering only half as much nationwide support as that of frontrunner Romney. In a distant fourth place with approximately 11% of voters’ support across the country sits Ron Paul, who is also vying for the GOP presidential nomination. Paul has co-sponsored several internet poker bills with his Congressional colleagues, including HR2366 of Rep. Joe Barton (R-TX), which proposes regulation of online poker in America. HR2366 is a bipartisan bill co-sponsored by 27 lawmakers that was introduced in June of 2011, but has yet to find its way beyond committee debates.

The PPA is urging poker players to voice their concerns to both Santorum and Romney via Twitter and Facebook. As of this writing, the Nevada caucus is currently underway. Unfortunately, Romney is expected to also come out on top in that state. However, many believe that pro-online poker candidate Ron Paul will have a more favorable showing in Nevada in comparison with nationwide polling results.