With the recent announcement that Rep. Barney Frank (D-MA) will be retiring from Congress at the conclusion of the current term, the Poker Players Alliance (PPA) praised the 71-year-old lawmaker’s efforts to legalize online poker. 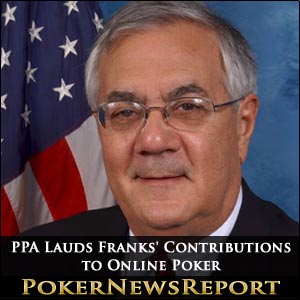 With the recent announcement that Rep. Barney Frank (D-MA) will be retiring from Congress at the conclusion of the current term, the Poker Players Alliance (PPA) praised the 71-year-old lawmaker’s efforts to legalize online poker.

“Congressman Barney Frank has been a champion for Americans’ civil liberties,” PPA Executive Director John Pappas said. “His longtime support for the freedom of adults to play online poker in a safe and regulated environment has been invaluable to our organization and to the interests of the entire poker community.”

Pappas also added that the 16-term politician’s proposed online gaming legislation could someday be responsible for [geolink href=”https://www.pokernewsreport.com/us-poker-sites”]online poker in the U.S.[/geolink] to be legalized. “The introduction and passage of HR 2267 through the House Financial Services Committee last year helped build the foundation for the online poker legislative proposals under consideration today. The poker playing community will continue to build on the foundation established by Congressman Frank and we will forever be grateful for his fight for our personal freedoms.”

As the main lobbying faction for American poker players, the PPA now counts 1.2 million members among its ranks. In working in conjunction with Frank and various other internet poker advocates in Washington in recent years, the organization will now have to turn to other lawmakers to take Frank’s role in the push for online poker legalization.

“While Congressman Frank may have been the first and most recognizable champion for internet gaming, other elected officials have followed his lead over the years,” Pappas said. “Today, the poker community has dozens of lawmakers who are eager to support our freedoms and the support is bipartisan. From Joe Barton (R-TX) to Ed Perlmutter (D-CO) to Steve Israel (D-NY) to John Campbell (R-CA), we are in a solid position of Congressional support moving forward.”

Campbell co-sponsored HR1174 with Frank, while Barton introduced HR2366, which proposes to legalize online poker through state-licensed agencies. Barton’s bill is thought to near markup after being debated heavily in the two hearings before the House Subcommittee on Commerce, Manufacturing, and Trade held in October and November.

PPA Vice President of Player Relations Rich Muny also heaped praise on Frank’s efforts on behalf of the poker-playing community. “Representative Frank has been a true champion for the rights of poker players. He stood up for us [players] before the PPA stood up for us. He was on the floor against the UIGEA before poker players were doing the same thing.”

It is expected that Frank will work toward the passage of online poker legislation through his final term in office, which will conclude next year.

“He’s invested in our issue.” Muny said. “I would expect for him to continue on as a champion on individual liberties. If he finds a way to make online poker legal, I would expect him to be supportive of it.”