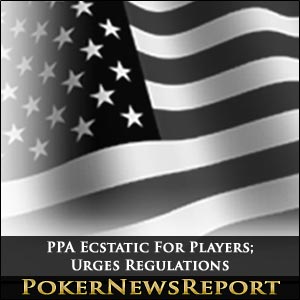 The finalized deal between PokerStars, FTP and the U.S. Department of Justice (DoJ) that calls for PokerStars to acquire FTP’s assets and for players with money stuck on the site to be repaid has the largest lobbying organization on behalf of poker players very thankful that millions of dollars will be returned to players throughout the world. However, the PPA still reminds the poker community that Americans should be allowed to play Internet poker in a safe and regulated environment so that the Full Tilt debacle will never be repeated.

Thanks to PokerStars, the PPA expects that tens of thousands of innocent American poker players will now have access to more than $150 million that has been kept from them for over 14 months, PPA Executive Director John Pappas said. We applaud that the parties made a process for the restitution of the players a central component of the agreement, and appreciate the government’s commitment to the fair treatment of the players.

Scores of players believe that the DoJ is the enemy for the Black Friday indictments that forever changed the online poker industry and left many players without the ability to retrieve their frozen funds at FTP for more than a year. However, the DoJ actually made it a high priority that players be fully reimbursed within a reasonable length of time following the finalized acquisition of FTP. This was apparent when negotiations to purchase FTP between Group Bernard Tapie (GBT) and the DoJ broke down on the government’s insistence that players be paid in full within 90 days–a provision which GBT could not agree to.

At the same time, let’s remember that Americans still remain unable to play poker with safe and secure online sites based in the U.S.–a freedom and consumer protection they should not be denied, Pappas continued. The PPA and its members continue to urge Congress to quickly enact thoughtful legislation to create a licensed and regulated U.S. online poker market that restores Americans’ freedom to enjoy a game of poker from their home computer.

Pappas may indeed get his wish as recent industry scuttlebutt points to a federal bill having been drafted by Senators Jon Kyl (R-AZ) and Harry Reid (D-NV) that will legalize online poker. The lawmakers are reportedly trying to drum up support among Republican legislators who may require more than a little prodding in order to be swayed on the issue. In the absence of federal Internet poker legislation, Nevada is going full steam ahead with its plans of intrastate online poker, with the first legal sites expected to be up and running by the end of the year.