The Poker Players Alliance (PPA) has released a statement in defense of Rep. Joe Barton (R-TX), who’s sincerity in backing online poker legislation was questioned by a noted gaming expert. 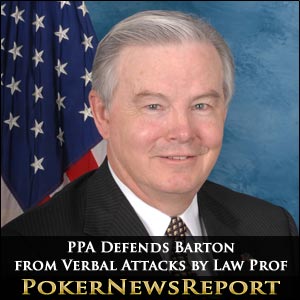 The Poker Players Alliance (PPA) has released a statement in defense of Rep. Joe Barton (R-TX), who’s sincerity in backing online poker legislation was questioned by a noted gaming expert.

I. Nelson Rose, a Professor at Whittier Law School and a Visiting Professor at the University of Macau, is an internationally syndicated columnist and author of “Gambling and the Law,” published in 1986, as well as the more recent “Internet Gaming Law.” Rose has testified as an expert witness in numerous states throughout the U.S., in addition to New Zealand and Australia.

Through various media outlets, including a column written by Rose and published in “Poker Player Newspaper” on Dec. 12, Rose wrote that Barton had repeatedly voted against online poker legislation in the past by supporting a ban on the use of credit cards to fund internet gaming accounts in 2003 and also supported the Unlawful Internet Gambling Enforcement Act (UIGEA) in 2006. Rose insinuated that the Texas lawmaker “seems to only have come out in favor of online poker when he discovered that he could use it to get political donations.”

The PPA’s VP of Player Relations Rich Muny, in the statement defending Barton, took issue with Rose’s comments, saying that his verbal “attacks center not on issues of the [poker] legislation itself,” and instead are more focused on “Barton’s politics and on Rose’s apparent disagreement with them.”

The statement further pointed out that in order to win legislative approval on internet poker regulations, support from both Congressional bodies would be needed and that, naturally, some of those who were in favor of the UIGEA five years ago, of which Barton was one, would have to change their stance on the issue for online poker legislation to have a chance at succeeding.

The PPA called Barton “a great champion for the cause and has earned the support of the poker community” and suggested that “Professor Rose should keep his political attacks on Rep. Barton separate from activities where he is claiming to speak for the poker community.”

Rose recently addressed the issue on a program of QuadJacks.com radio and said that he never put himself in authority to “speak for the poker community.” He claimed to merely be voicing his opinion on the matter, and felt that readers should know it was his opinion and that he wasn’t speaking on behalf of poker players or anybody else. Rose further explained that he wrote the piece because he felt that online poker players hoping for regulations were being “outplayed” by Barton, as Rose believes that Barton is readily accepting lobbying contributions despite his awareness that his bill has a poor chance of becoming law.

Barton’s bill, HR2366, would legalize online poker in the U.S. by giving authority to a series of agencies run by individual states. But Barton demurs when given credit for the legislative proposal. “When we switched over [to a Republican House majority], the Poker Players Alliance (PPA) and other stakeholders came to me and asked if I could make a bill,” Barton said. “My bill really is just building on several bills in the past introduced by Barney Frank and John Campbell (R-CA). It’s the next evolutionary step. I don’t feel pride of authorship because I’m building on the work others have done.”

In a weekly update from the PPA, Muny said that the poker community needs to remain united and despite “misguided” beliefs such as those of Professor Rose, that there is plenty of reason for optimism in 2012. “With poker legislation pending in the House and with the poker issue continuing to gain momentum nationwide, it is clear that 2012 will be a year of great opportunity for us,” the PPA update said. “It will also be a year of challenges. That is why it is important for all of us to participate in this fight. I ask that everyone keep active in 2012 to ensure that we are heard on Capitol Hill. We can win this if we all take a stand for our rights!“