With the Full Tilt remission process in full swing, the Poker Players Alliance (PPA) stands at the ready to assist players who have problems with filing claims. 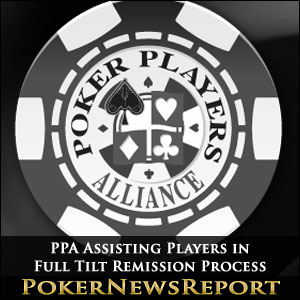 With the Full Tilt remission process in full swing, the Poker Players Alliance (PPA) stands at the ready to assist players who have problems with filing claims.

As a number of questions and issues have cropped up regarding account balances and claim submission, players who would like some help in navigating through the maze of getting a Petition for Remission on file with claims adminstrator Garden City Group can turn to the PPA for assistance.

Coming soon to the PPA website at theppa.org will be an “information guide” that will allow players having problems to better understand the entire process. In addition, a team has been set up at PPA to answer the queries of players. Those with reimbursement concerns are advised to send emails to repayment@theppa.org. Make sure to read their Repayment resource center first at theppa.org.

Naturally, priority will be given to PPA members who have paid their dues. Membership fees are only $15 annually and provide a number of benefits that include a litigation support network for any poker-related legal questions that may arise, periodic teleconferences with PPA’s board of directors, a membership certificate, and other goodies such as instructional videos, official PPA playing cards, or a PPA t-shirt.

The PPA was founded in 2005 and currently boasts over one million members. Headquartered in the nation’s capital, the non-profit organization is dedicated toward establishing favorable laws that provide poker players with a secure, safe and regulated place to play online poker.

Of course, the grassroots organization is also highly concerned with getting the more than $150 million back into the pockets of U.S. players who formerly competed at Full Tilt Poker. Those players with grave concerns over the remission process who would like to summon the assistance of the PPA are advised to include supporting documentation such as screenshots or emails that will allow the PPA team to better understand the nuances of the claim in question.