The Poker Players Alliance has called on New Jersey residents to show their support for the Internet gambling bill that sits on Gov. Chris Christie’s desk. 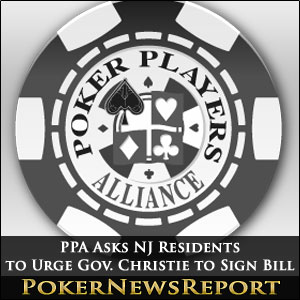 The Poker Players Alliance has called on New Jersey residents to show their support for the Internet gambling bill that sits on Gov. Chris Christie’s desk.

The PPA would like those residents to notify the governor and express their desire that he sign the bill into law. More than 20,000 of the 1 million-plus PPA members reside in New Jersey. The PPA website offers a new page providing information that allows players, whether they are PPA members or not, to email, tweet, or phone Christie’s office in support of the online gambling bill. The page has instituted a countdown clock that ticks away the time that Christie has remaining in which to make his decision.

Thousands of New Jersey residents have contacted the Governor urging him to sign the bill into law, PPA Executive Director John Pappas said. I hope he heeds the thousands of letters and phone calls he’s received and brings licensed and regulated online poker to New Jersey.

Christie recently voiced his reluctance to sign the bill when a caller to a monthly “Ask the Governor” radio show asked about his intentions on the issue. The governor believes that a proliferation of legalized online gambling may prevent gamblers from making the trek to Atlantic City casinos. He also expressed concerns that the law would create “a whole new generation of addicted gamblers.”

In regards to Christie’s first concern, recent studies have indicated that online poker does not keep players at home and away from land-based casinos. Many believe the opposite to be true, as satellite tournaments played online often allow the winners to partake in tourneys at live events. Poker’s popularity, both online and live, increased greatly in 2003 when an unknown named Chris Moneymaker was victorious in an online satellite tournament that offered an entry to the Main Event of the World Series of Poker in Las Vegas. Moneymaker then proceeded to win the WSOP championship bracelet, prompting many new players to log on to online poker sites and visit live poker rooms in casinos.

The New Jersey Senate voted 33-3 in favor of online gambling legislation on Dec. 20. Christie has 45 days to make a decision. The PPA has calculated Feb. 7 as the last day for the governor to act. If Christie chooses to neither sign nor veto the bill by the deadline, it will become law. He also can choose to veto the bill, but propose various changes or modifications.