POWERFEST Coming to partypoker This Month 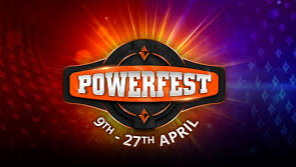 Since spring has sprung, online poker sites are kicking the poker action into high gear. Festivals and series are popping up left and right, with players having access to plenty of gaming options. This weekend, partypoker will begin its popular POWERFEST, featuring almost three weeks of gaming options. The series will run from April 9-27, providing quality poker tournaments each day.

Details of the Series

The full schedule of events is not available yet, but we do have a few details about POWERFEST. Each event will be split into levels. The levels will start on the low end and go up to Super High Roller. This allows players of all bankrolls to take part. Buy-ins will start at just $1.10, making it easy for every player to take part.

The Main Event will be a three-day affair with a $1 million prize pool on offer. This tournament is scheduled for April 24-27. The buy-in is $1,050. Players can qualify at a much lower price point by taking part in special satellite options.

The tournament series will feature several formats so players can mix up the gameplay. There will be the traditional events of course along with 6-Max, PKO, and Mix-Max. The series will also include three-handed POWERFEST SPINS games. A multiplier can be added to the game, which helps to build up the prize pool which provides tickets to the tournaments.

Satellites are running now, providing players with plenty of opportunities to earn a seat to a POWERFEST event. Find satellites at just $0.11!

Along with partypoker, other online poker sites are offering up special tournament series. At PokerStars, players have access to the Spring Championship of Online Poker. The series already started on April 4 and will run through April 28.

GGPoker is ready to get in on the action too. The site is offering the Spring Festival, and it also kicked off on April 4. The series runs through April 25 and also offers multi-table tournaments with a Low, Medium, and High buy-in level. There is a whopping $150 million in total prize money up for grabs and 300 individual tournaments.

Each of these series provides satellites or qualifiers so players can earn a seat at a much lower price point. By taking part in satellites, players can pay a small portion of the original buy-in to earn a spot in the event.

With so much poker action, it might be hard to know where to start. Take a look at all the schedules and narrow down your options. With the Low buy-in tier, you can easily compete in events at each site, and pay next to nothing to play in massive poker tournaments. Check out your options today to get started.