Potential Buyers of Atlantic Club Must Bid by Nov. 18

Last week’s Atlantic Club bankruptcy filing went before a judge who ruled that any companies wishing to place a bid on the casino must do so by Nov. 18. 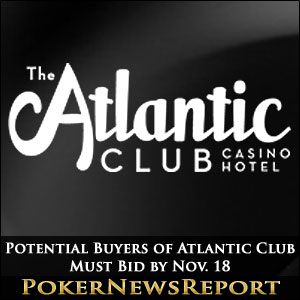 Last week’s Atlantic Club bankruptcy filing went before a judge who ruled that any companies wishing to place a bid on the casino must do so by Nov. 18.

Judge Gloria Burns made the decision in light of the argument made by Atlantic Club attorneys who revealed that the casino cannot continue operations on a long-term basis. It is likely that the fast-track proceedings will see a new buyer emerge at an auction sometime in December.

It is not yet known which company will find the deed to the casino under their Christmas tree come Dec. 25, but whoever does will likely also have a Christmas stocking loaded with goodies. Those goodies will come in the form of an opportunity to obtain a site operator’s permit in New Jersey’s online gambling regime.

Though the new owner will miss the intial launch date of Nov. 26, there is nothing that would preclude that owner from possibly launching an online poker and gambling platform at a later date. Any potential new owner will likely be prompted to make a bid with Internet wagering licensing in mind.

The Atlantic Club currently owes more than $3.5 million for services related to operating functions and almost $1.5 million in legal fees, the Press of Atlantic City reported. But its largest creditor is the pension plan established for its own employees, a total that is not known but speculated to be in the ballpark of $30 million.

Those employees currently number 1,660 and Judge Burns ruled that paychecks will be distributed to the workers during the Chapter 11 bankruptcy proceedings. She also ordered that the casino continue to pay whatever taxes are owed.

Through October of 2013, the Atlantic Club has seen an increase of gambling revenue of about 11%, but is still reporting an operating loss over $7 million. Notices to employees were issued stating that the casino will close its doors by the 1st of January, but such notification is a legal requirement during the bankruptcy action.

Another Atlantic City casino, the Revel, was itself mired in bankruptcy proceedings earlier this year. New investors took over six months ago, but a recent report from Bloomberg indicates that those owners are debating a possible sale of the casino.

Both the Revel and Atlantic Club failed to name any online gaming partners for the state’s upcoming Nov. 26 launch. Neither will be participating initially when regulators allow sites operated by the state’s other 10 casinos to accept real-money wagers from New Jersey residents and visitors in just two weeks.