With an online gambling launch in New Jersey only three months away, the new format couldn’t come at a better time as casino gaming revenue continues to fall. 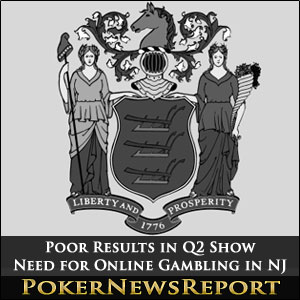 With an online gambling launch in New Jersey only three months away, the new format couldn’t come at a better time as casino gaming revenue continues to fall.

Not all the casinos posted lesser Q2 numbers on the ledger, as two of the boardwalk’s casinos actually improved over the same period last year. Tropicana Casino and Resort was the biggest winner in that category, gaining a massive 27%.

But the overall land-based gaming picture on the Eastern seaboard continues to suffer, with some of the results attributable to neighboring Pennsylvania. Keystone State casinos have pilfered much of the action of live gamblers who had in years past been making their wagers in New Jersey.

But expect the fortunes of Atlantic City casinos to vastly improve come November 26 when Internet poker and gambling makes its debut. The online gaming law signed six months ago by New Jersey Governor Chris Christie was done in an effort to bail out the struggling casinos and will likely go a long way in accomplishing that goal.

Meanwhile, rumors continue to circulate that the Atlantic Club may soon turn over the keys to a new owner. PokerStars won’t be putting their name above the door after losing $11 million in attempting to purchase the brick and mortar earlier this year.

Churchill Downs and Paddy Power are believed to be among the top bidders for the Atlantic Club. That rumor has been making the rounds throughout the industry via Twitter, but no official announcement has yet been offered.

The Atlantic Club and Revel remain the only two New Jersey casinos without a partnership agreement in place regarding an online gaming launch. No need to enter into such an agreement when negotiations to sell continue.