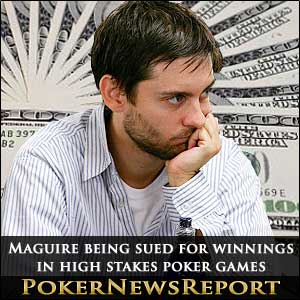 Usually once you win a hand of poker in a cash game, you take the pot and the money is yours. You may go on to lose it, win more or simply slip away into the night with your winnings. Apparently that’s not the case in a certain celebrity poker games that went on for many years in Beverly Hills.

The California trustee in the bankruptcy case of Brad Ruderman has named celebrity members of a high stakes Hollywood poker game in a lawsuit. Brad Ruderman, who was the CEO of Ruderman Capital Partners and who bilked folks out of over $44 million in supposed investments, is in prison in Texas for 10 years after being convicted of a wire fraud scheme. It’s alleged in the suit that he was part of a high stakes poker game that was ongoing in Beverly Hills’ hotel suites.

From 2002 through 2009, Ruderman engaged in a Ponzi scheme that was finally shut down by a FBI investigation. Court papers related to the scheme note that “To obtain investments in the fund, Ruderman misrepresented to potential investors that Lowell Milken (chairman of the Milken Family Foundation and younger brother of Michael Milken) and Larry Ellison (the CEO of Oracle Corporation) were investors in the funds.”

To keep the scheme going, Ruderman offered investors fake statements that said his investments in hedge funds were making between 15% and 61% each year. He claimed that they were worth a whopping $800 million when in reality the funds lost a huge amount of cash over the seven years and by the end of 2008 were worth less than $650,000.

The players in the high stakes games included Tobey Maguire, perhaps known best for playing Spider-man in the movies, and other film stars such as Leonardo DiCaprio (Catch Me if You Can and The Titanic), Ben Affleck (Good Will Hunting and Hollywoodland) and Matt Damon (Good Will Hunting and Rounders). The No Limit Texas Holdem game had a $100,000 buy-in.

Ruderman is said by the FBI to have spent $5.2 million at the regular poker game, plus he spent another $8.7 million on various excessive expenses. Apparently, Ruderman was about as bad at poker as he was at investing.

The lawsuit, which was filed by Ruderman’s California bankruptcy trustee in an attempt to get those bilked in the scheme a portion of their money back, notes, “As part of the scheme, funds invested in [Ruderman] were transferred to persons such as Defendant [Maguire] who received the funds on account of Ruderman’s gambling losses and on account of Defendant’s gambling winnings.” It goes on to claim, “[Maguire is] “not entitled to receive the transfers from the Debtor, which transfers were [comprised] of improperly-diverted investor funds.”

The suit also notes that “the player had no legally enforceable contractual right to receive payment“, since the games were not licensed and were illegal. Gambling itself is a misdemeanor and there is no actual criminal investigation of the game. However, this suit is sure to get the attention of the IRS and California tax agents since gambling winnings are taxable and are to be claimed on tax returns.

Amongst the other big winners named in the suit were Nick Cassavetes who is alleged to have won $73,800 when playing Texas Holdem with Ruderman and 1970s sitcom star Gabe Kaplan who is being sued for $62,000 that he supposedly won from Ruderman. Kaplan played Mr. Kotter on the highly popular “Welcome Back, Kotter,” which also starred a very young, new star named John Travolta.

Kaplan, who has made celebrity appearances on numerous poker shows and at various venues, is known to be a very good poker player. Also named is poker professional Dan Bilzerian, a.k.a. the “Blitz,” who is said to have won $100,000 from the ersatz hedge fund investor.

An assistant to one of the poker players, Molly Bloom, is said to have organized the ongoing games. It’s alleged that Bloom, who once the games got going made her involvement a business venture from which she allegedly made six figures, arranged for the players to have “food, alcohol and massages” and also “arranged for the settlement of gambling winnings and losses between and among the players.” Bloom is being sued for $473,200.

In a response to the court, Bloom denied any involvement in the organization of any illegal poker games or gambling, She did, however, note that she “performed services and received value from Ruderman in good faith in exchange for her services.” She also said in the response that she sent to the court that a “large percentage” of cash given to her by Ruderman then went to “third parties.”

The lawsuit generated from the trustee came about because in 2010 they realized that large transfers of cash from the fund that Ruderman was overseeing were used to pay his gambling debts.

In the suit, it is noted that the poker games were held in suits at luxury hotels in Beverly Hills and sometimes at the private residence of players. This was a regular game that was obviously for high rollers.

Although this lawsuit may seem crazy to some, the fact is that money received from illegal activity, depending upon the state, can be confiscated. In California the law does prohibit the playing for money in unlicensed poker games. But the statute is rarely enforced.

Because Ruderman was allegedly using money in the game that was stolen from investors the suit has a chance. Basically, those who won the money were receiving stolen goods or money. Such good or cash are supposed to be returned to those from whom they were stolen.

Apparently for all players involved in a poker game with Ruderman, the stakes were a lot higher than anyone had imagined.