PokerTracker reacted to Bodog Poker’s implementation of new software that allows players to play anonymously without screen names in an effort to prohibit poker-tracking software, by minimizing the effect that Bodog’s innovative software will have on their product. 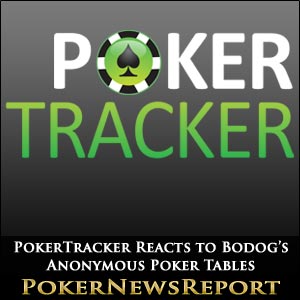 PokerTracker reacted to Bodog Poker’s implementation of new software that allows players to play anonymously without screen names in an effort to prohibit poker-tracking software, by minimizing the effect that Bodog’s innovative software will have on their product.

PokerTracker are the developers of one of the most well-known brands of online poker-tracking software designed to assist poker players in improving their skills in playing online poker games.

“PokerTracker is not the focus of Bodog’s mission, they are after data mining sites,” a PokerTracker representative said on Twitter.

That sentiment was echoed by PokerTracker’s Steven McLoughlin, who said that he was contacted by Bodog’s Patrick Selin earlier this year and was told about Bodog’s plans to eliminate data mining on Bodog Poker. McLoughlin said, “It is fairly obvious that PokerTracker, which ethically follows the poker room Terms and Conditions, got caught in the crossfire.”

Users of PokerTracker software benefit by being able to track and analyze statistical information of poker hands that the user is involved in. A great deal of the information is gleaned from hand histories that allow the user to analyze information and fix “leaks” in their game where they might be making bad decisions and playing hands incorrectly.

However, the statistics tabulated also reveal patterns and tendencies of the user’s opponents through use of heads-up displays (HUDs). In that regard, PokerTracker is not “caught in the crossfire” of Bodog’s attempt to eliminate more experienced players who are using poker-tracking software to gain an edge over the casual players. PokerTracker is directly in the target of Bodog’s mission as precisely the type of software Bodog is attempting to render ineffective by removing screen names of players, thereby eliminating the statistical tabulation of hand histories of opposing players.

PokerTracker again worked on damage control by saying via Twitter, “Ironically, Bodog’s Terms of Service still legally permits the use of PokerTracker,” and that players are allowed to gather statistical information from their “own first-hand experience.”

Well, obtaining your own statistical data to study your play and make better decisions in the future, that should be allowed as an excellent way to improve your poker game. But once you start targeting the play of opponents by compiling information on their weaknesses in an effort to exploit the more casual player, that’s the type of predatory play that Bodog seems to take issue with.

Ironically, the weaker players who once had targets on their backs are no longer, as anonymous play has removed the targets. However, the target has now been placed on PokerTracker and the users of their software. And Bodog’s aim seems right on target.

Let us know your thoughts by leaving a comment , and come back to stay informed on the latest poker news.