The eight edition of the World Cup of Poker (WCP) will take place at the Atlantis Resort and Casino in the Bahamas as part of next year’s PokerStars Caribbean Adventure (PCA). 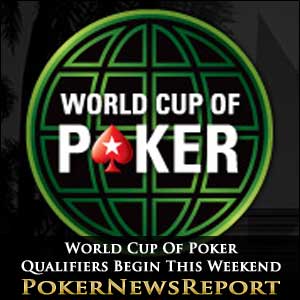 The eight edition of the World Cup of Poker (WCP) will take place at the Atlantis Resort and Casino in the Bahamas as part of next year’s PokerStars Caribbean Adventure (PCA).

Italy – captained by Team PokerStars Pro Luca Pagano and also including Ravel Furfaro, Marco Mancini, Litterio Pirrotta and Davide Scafati – secured the title last time on Paradise Island with a tight victory over the Liv Boeree-led UK side, while this edition next January will see seven countries taking part in an attempt to lift the trophy at the islands nation that sits south-east of the USA in the Atlantic Ocean.

This weekend will see stage one of the qualifiers take place over two days, with the chance of turning out for your nation at next year’s PCA – which runs from January 5-15 – with the proviso that players put together a few dollars to meet the entry fee, although one of the qualifying events is free of charge.

Once the qualifiers are completed, players then have to get through regional knockout tournaments, with a four-strong team ultimately representing their nation in the Bahamas.

Each team consists of a captain, who will be a Team PokerStars pro, a goalkeeper, a defender, a midfielder and a striker – as with a football (or soccer) team – with each of the four positions having their own qualifying event.

Those interested should note that first-time depositors with website PokerStars will be rewarded with an $11 stage one ticket – for the midfielder role – when keying in bonus code ‘WCP8’, as well as the normal 100% first deposit bonus of up to $600.

The qualifiers take place this Saturday and Sunday, with dates and times allocated to each participating country in a particular group. These can be located on the WCP Qualifiers page.

Additionally, the three available positions have their own buy-ins, from a free entry as a goalkeeper, $1.10 for a defender and $11 for a midfielder, while the striker position – awarded by invitation-only – is reserved for winners of last year’s Tournament Leader Board (TLB).

Stage two consists of a knockout round for those selected for each country’s team, and they will compete against players from the other nations included in a regional group, with the team that puts up the best show during four events making the final.

Again, check out the WCOP Qualifiers page for details for stage two.

Finally, there is stage three, when the seven successful nations will face off against each other in the PCA. Details of that event will soon be announced.

A total of 65 countries will compete for final places, although players from any nation not listed below can also make the final as part of the Rest of the World side.