Details have been ironed out for the Team PokerStars versus The Professionals of Full Tilt Challenge, with all matches slated for Sunday, March 10. 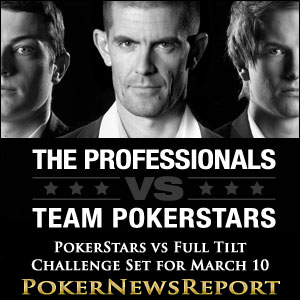 Details have been ironed out for the Team PokerStars versus The Professionals of Full Tilt Challenge, with all matches slated for Sunday, March 10.

As reported at PokerNewsReport last week, Daniel Negreanu and Gus Hansen traded barbs via Twitter recently in which Hansen reminded Negreanu about a $575,000 pot he took from KidPoker on High Stakes Poker in 2006. That led Negreanu to put forth a challenge to Hansen and his fellow Full Tilt pros, Tom “durrrr” Dwan and Viktor “Isuldur1” Blom.

The challenge was accepted and Negreanu has chosen Bertrand “ElkY” Grospellier and Isaac “luvtheWNBA” Haxton as his team mates to square off against The Professionals. The challenge will be played battleship style on laptops at Full Tilt Poker during the EPT London. In other words, the opponents will face each other, separated only by their computers.

Hansen was allowed to choose the matchups and has pitted Blom against Grospellier at 10:00 ET, Dwan versus Haxton at 13:00 ET, and Hansen will face Negreanu at 16:00 ET. The pros will each put up $50,000 for their respective matches and each player of the winning team will collect $10,000 in tournament buy-ins from the losing poker site.

Each match will be played heads-up and spread over three tables with starting stacks of 3,000 in chips and blinds escalating every 15 minutes. A player must win at least two of three tables to win the match and the winning team must capture at least two matches.

If you happen to correctly pick all three winners, you will gain entry to all three freerolls and also receive a cash bonus equivalent to your largest deposit or transfer up to $100 made during the qualifying period.