The stakes have never been higher, as the largest WCOOP in history kicks off on September 8. 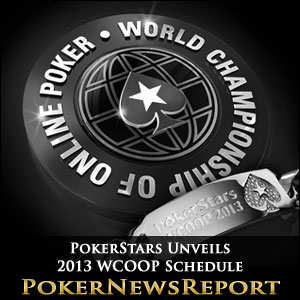 The stakes have never been higher, as the largest WCOOP in history kicks off on September 8.

PokerStars is known for its outlandish promotions, huge entry fields and stellar rakeback program, but never before has the site held a series of tournaments this big. In a recent announcement, PokerStars revealed its schedule for the 2013 World Championship of Online Poker. Otherwise known as the WCOOP, this year’s event will feature an otherworldly $10 million more in guaranteed money than last year’s event.

You read that right – $10 million more, not $10 million total. In total, $40 million or more will be given away during a three-week stretch. The grand festivities will kick off on September 8th with a $109, $500k guaranteed no-limit hold’em kick-off event. Two other tournaments will run that day, both of them featuring $1 million-plus prize pools. When all is said and done, 14 events will pay out at least $1 million, with several surpassing that amount by a large margin.

Event buy-ins will range from the $109 featured in the opening event all the way up to $10,300. These three exclusive high-roller events are reserved for the best online poker players in the world. The first high-roller, to take place on September 15th, is a second chance tournament, meaning players that bust will be allowed to re-enter. The second is a fairly standard NLHE tourney, except that it does not allow for late registration. And the third, which will take place shortly before the Main Event, is an 8-Game tourney with a $500k guaranteed prize pool.

The Main Event will cost $5,200 to enter and pay-out a guaranteed $8 million in cold hard cash. By PokerStars’ math, it is projected that at least 1,600 players will enter the event. Last year’s main paid out over $9.1 million, with first place receiving just over $1 million in prize money. It wouldn’t be shocking if those numbers were usurped this year. Registration for the Main Event has suffered a bit since Black Friday, but not markedly.

This year’s WCOOP will boast 66 events, up from 65 over last year. Satellites will be running for every event around the clock until the event in question commences.

As has become the standard, PokerStars will also be running a “Player of the Series” competition, where winners will receive a lofty prize package consisting of entries into live PokerStars hosted tournaments (like the PCA), SCOOP entries and other rewards. The top 10 players and the top woman will also be recognized for their efforts.

Unfortunately, players from the United States will miss out on this year’s WCOOP. However, residents of New Jersey will likely be able to join in the fun for the spring series. Stay tuned!