PokerStars UKIPT to Include Welsh Stop for the First Time

The PokerStars UK & Ireland Poker Tour (UKIPT) will make its first ever stop in Wales as four new dates were added to a season three schedule that stretches well into next year. 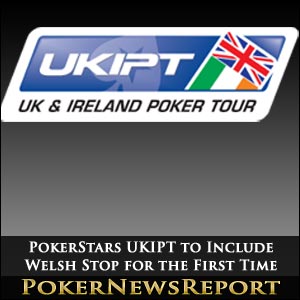 The PokerStars UK & Ireland Poker Tour (UKIPT) will make its first ever stop in Wales as four new dates were added to a season three schedule that stretches well into next year.

There is a distinct Celtic feel to three of the latest UKIPT stops, with Swansea being joined by Cork and Edinburgh – as well as English city London for the Grand Final – over the next 13 months.

With events in Galway, Nottingham, Dublin and Newcastle having been previously announced, there are now eight stops on the schedule – so providing poker fans throughout the British Isles with plenty of choice to satisfy their live tournament needs.

Of course, titles will be up for grabs, as well as massive prize pools, UKIPT Leader Board points and seats at the Grand Final in London come March of next year – surely making this the most thrilling of tours in Britain and Ireland.

Certainly, Kirsty Thompson – the tour’s president – is “delighted” that the UKIPT is coming to Wales “for the first time…to further extend the reach of the UK and Ireland’s largest poker tour”.

The three other new stops – all included in the second half of the schedule – take place in 2013, with the Balmoral Hotel hosting the Edinburgh event from January 17 to 21, the Rochestown Park Hotel in Cork taking in February 14 to 18, and the London Grand Final leg arriving in the British capital city on March 8 for five days until the 12th at an as-yet-unnamed venue.

Leg one of the UKIPT takes in beautiful west coast Irish city Galway from February 16 to 20 – once again at the wonderful Radisson Hotel.

Every entrant next week will undoubtedly be aiming to emulate Nick Abou Risk’s victory from season two in Galway, when the Dublin-based Canadian picked up $87,655 for taking down the €1,100 buy-in main event back in early December of 2010.

The buy-in might be lower now, but there’s every chance the 266-entry field from 2010 will be beaten this year, so hopefully keeping the prize pool very healthy.

But, never fear, there is still time to qualify for the €770 buy-in main event via exclusive satellites at PokerStars – who have increased the guaranteed qualifiers for all stops this season.

You don’t even have to spend a single penny to make it to Ireland as the world’s leading poker room is offering free UKIPT satellites right now by using just 150 FFPs (frequent player points), while cash qualifiers start from only £1.10.

If you can’t make it to the Emerald Isle, then satellites for the second stop, at Nottingham’s Dusk Till Dawn – Europe’s largest dedicated card room – are also being held now at PokerStars, where the prize packages on offer will, as always, provide qualifiers with the main event buy-in, hotel accommodation and money to spend.

It’s easy, too. Just log in to your PokerStars account, navigate to ‘Events’, look for ‘Special’ and choose the ‘All’ tab.

Remember, you can find good UKIPT satellites at PokerStars, so – if you haven’t already signed up to this poker room – maybe it’s time to get on over there and firstly enjoy the wonderful 100% first-deposit bonus of as much as $600.

Now, if you are about to visit PokerStars for the first time, here’s what to do. Firstly, download and launch the poker room’s game software and sign up, before then navigating to the main lobby to click the ‘Events’ tab. After that, click on the ‘Special’ tab and, hey presto, all the satellites will be displayed. Easy, huh.

The full UKIPT schedule (* denotes 3% of event prize pool to be used to cover costs of floor staff and dealers):