Delaware has received 14 bids from companies seeking to participate in the state’s online gambling scheme, including PokerStars. 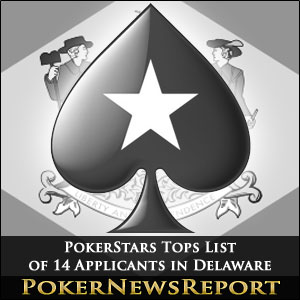 Delaware has received 14 bids from companies seeking to participate in the state’s online gambling scheme, including PokerStars.

The deadline for submitting proposals to the Delaware Lottery expired last Friday. The 14 applicants will be scrutinized by gaming officials and are scheduled to orally present their applications April 1-12. In addition to PokerStars, Amaya Gaming, International Games Technology, SHFL Entertainment, Continent 8 Technologies, Stan James PLC, and 888 Holdings are among the companies who submitted proposals.

Canada-based Amaya Gaming recently acquired the Ongame Network. Their proposal submitted to Delaware Lottery officials was filed jointly with Bally Technologies. Last year, Bally made history by being the first company to be granted an interactive gaming license in the state of Nevada.

The proposal by 888 Holdings was also filed as a joint venture. 888 has an existing partnership agreement with Scientific Games and WMS that was brokered last year. Scientific Games is already established in Delaware, providing the technology for the state lottery system, GamblingCompliance reported.

Rational Group, parent company of PokerStars, is currently embroiled in controversy in New Jersey. The company hopes to enter the online poker market in the Garden State, but has encountered opposition from the American Gaming Association. The AGA filed a strongly-worded petition seeking to block PokerStars from acquiring the Atlantic Club Hotel Casino and entering the online market. It is not known at this time if the AGA will also seek to intervene in the licensing process in Delaware.

The First State has targeted Sept. 30 as the date in which gaming sites should be up and running. Companies who made proposals were asked to keep that deadline in mind. Delaware plans to offer bingo, keno, video lottery games, poker, and casino table games. The state also has plans to eventually integrate both its lottery and a sports betting offering via the Internet.