After a weekend of speculation on the online forums, the official announcement has been made that PokerStars are to be acquiring the assets of Full Tilt Poker. 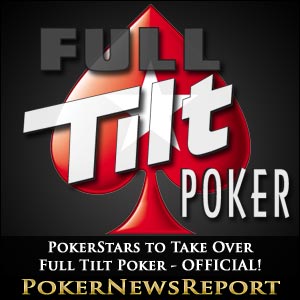 After a weekend of speculation on the online forums, the official announcement has been made that PokerStars are to be acquiring the assets of Full Tilt Poker.

Rumors that an announcement was imminent started the rounds on Friday following a tweet by Wendeen Eolis – a New York based legal consultant and writer for the American poker web site Poker Player Newspaper – claiming she had been advised on good authority that negotiations between PokerStars and the United States Department of Justice with respect to Full Tilt Poker have come to a conclusion and declaring that FTP customers will see their monies well in time for Christmas shopping.

Despite coming under abject and personal criticism for fueling speculation, Eolis was proven right at 16.00 GMT today when a statement from the Department of Justice in the Southern District of New York announced that a deal had been finalized which will see Full Tilt Poker revived within 90 days and players from the Rest of the World able to withdraw their bankrolls immediately and without penalty.

The key points to come out of the PokerStars/Full Tilt Poker agreement are:-

One final word about the future U.S. market. Our settlement acknowledges that both PokerStars and Full Tilt are eligible to apply for a license in the U.S. to offer real money poker when states or the federal government offer such an opportunity. We look forward to this opportunity and are confident that we bring tremendous value, regulatory experience, market credibility and financial integrity to the marketplace.

Dublin – July 31, 2012 – Full Tilt Poker is very pleased to announce the conclusion of a three-way transaction with PokerStars and the United States Department of Justice which will result in all of FTP’s US players having the opportunity to be paid. The agreement ends the company’s civil forfeiture proceedings with the U.S. Department of Justice.

Under the terms of the agreement, PokerStars will pay a substantial amount of money to the United States, and the government has agreed that all U.S. players will have an opportunity to request that they be compensated out of those funds for their losses.  In addition, within ninety days PokerStars will make available for immediate cash withdrawal or play, the account balances for all of Full Tilt Poker’s non-U.S. players.

Full Tilt Poker apologizes to all of its customers who endured a long and difficult period wondering whether this day would ever come.

Full Tilt Poker expresses its appreciation to its loyal employees whose hard work over the last 15 months preserved the value of the Full Tilt Poker assets so a deal like this could be possible, and to PokerStars and the United States Department of Justice for their efforts in bringing about this resolution.

Here is the full press release from PokerStars:

ONCHAN, ISLE OF MAN – July 31, 2012 – PokerStars today announced that the Company has reached a settlement with the U.S. Department of Justice (DOJ) Southern District of New York. As part of the settlement agreement, PokerStars has also acquired the assets of Full Tilt Poker, and has committed to the full reimbursement of Full Tilt Poker customers outside the United States.

The total amount to be paid by PokerStars is USD$547 million which will be payable over a period of three years. The money paid to the US Government will in part be used to reimburse former Full Tilt Poker customers in the United States, through a remission process to be administered by the Department of Justice. PokerStars repaid all amounts owing to its own U.S. customers shortly after it closed its U.S. operations.

PokerStars will also make available in a segregated bank account, all outstanding balances owing to all non-U.S. customers of Full Tilt Poker (an amount totalling USD$184 million), with no restrictions on withdrawals, within 90 days of completing this transaction. PokerStars has remained open for non-U.S. players, with all its licenses in good standing, without interruptions.

Under the agreement with the Department of Justice, PokerStars does not admit to any wrongdoing. Furthermore, the agreement explicitly permits PokerStars to apply to relevant U.S. gaming authorities, under both PokerStars and Full Tilt Poker brands, to offer real money online poker when State or Federal governments introduce a framework to regulate such activity.

PokerStars plans to re-launch Full Tilt Poker in most markets as a separate brand, following the appointment of a new, independent management team. Full Tilt Poker’s operations will continue to be run from Dublin, but regulatory oversight will be transferred to the Isle of Man. Further details of these plans will be announced shortly.

“We are delighted we have been able to put this matter behind us, and also secured our ability to operate in the United States of America whenever the regulations allow,” said Mark Scheinberg, Chairman of the Board of PokerStars. “This outcome demonstrates our continuing global leadership of the online poker industry, and our commitment to working with governments and regulators to ensure the highest standards of protection for players.”

“Acquiring certain assets of Full Tilt Poker strengthens PokerStars, brings welcome relief to Full Tilt Poker players who have been waiting over 12 months for repayment of their money, and benefits the entire poker community. Full Tilt Poker’s customers outside the U.S. can soon look forward to accessing their accounts and playing on the re-launched site, confident that they are supported by PokerStars’ history of integrity and our track record of delivering high-quality and secure online poker.”

“The way we have operated our business since the U.S. Department of Justice brought its claim has underlined our credentials as a responsible online poker operator,” Scheinberg continued. “In particular, the prompt repayment of our former US customers in as quick a time frame as possible demonstrated our industry-leading commitment to the segregation of customer funds. We continue to encourage jurisdictions all over the world to introduce sensible online poker regulation.”

Stay up to date, follow the latest poker news daily at PokerNewsReport.com.