PokerStars to Tackle the Heads-Up Conundrum in 2014

In order to combat the problem with regards to heads-up hogging, or bumhunting, PokerStars is leaning towards a “forced play” option. 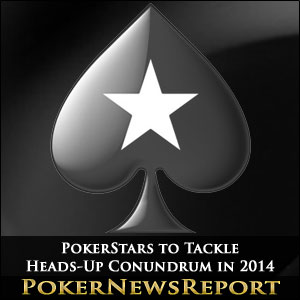 In order to combat the problem with regards to heads-up hogging, or bumhunting, PokerStars is leaning towards a “forced play” option.

Heads-up hogging is one of the most pressing problems facing online poker sites today. For those who don’t know, heads-up hogging, or bumhunting, is when a player sits at multiple heads-up tables, waits for an opponent, assesses his skill level, and based on information gathered from tracking software and/or online resources either plays the opponent or leaves the table.

The problem has become so prevalent that several sites have taken measures against it. For instance, Microgaming has removed traditional Heads Up tables in favor of Hu 8-man Blaze – a rush poker variant that forces players to play hands against each of the seven other players in the pool. Other networks, like iPoker, have implemented policies that restrict the access of players sitting at too many inactive tables. Bovada has taken a different approach altogether, removing avatars in favor of anonymous seating.

And it looks like by 2014. PokerStars will introduce its own anti-hogging measures. Earlier this week, PokerStars Nick proposed two possible solutions in a popular Two Plus Two forum thread. The first is a modified version of King of the Hill. In this system, Nick states that PokerStars would simply hide most of the tables in the lobby. This would result in a smaller, cleaner visible lobby, and would force stronger players to compete for one of the top tables.

PokerStars is also considering forced play tables. In this system, players sitting at a table would be required to play an opponent for a minimum number of hands. Failure to do so would penalize the player a small number of blinds. If either player busts before the minimum criteria is met, the player will not be penalized for leaving.

Under this system, it is expected that weaker regulars will be forced to move down in stakes and that heads-up hogging would at least be contained.  However, it wouldn’t be eliminated altogether, as the player could simply leave after the minimum number of hands. Also, forcing two players to play a required number of hands feels a bit totalitarian. Recreational players might be turned off by this system, and will opt to play other formats.

PokerStars Nick has indicated that we are leaning towards implementing a modification of the forced play system. Overall, player criticism of both options was focused and harsh.

For now, PokerStars will be limiting the number of nosebleed stakes HU tables, and plans on rolling out whatever system is ultimately decides on sometime in 2014.

[isGeoAllowed]If you are not playing at PokerStars and you would like to give them a try, make sure to use [geolink href=”https://www.pokernewsreport.com/pokerstars”]PokerStars marketing code[/geolink] “[bonuscode room=”pokerstars”]” when you sign up, to receive the full welcome bonus.[/isGeoAllowed]